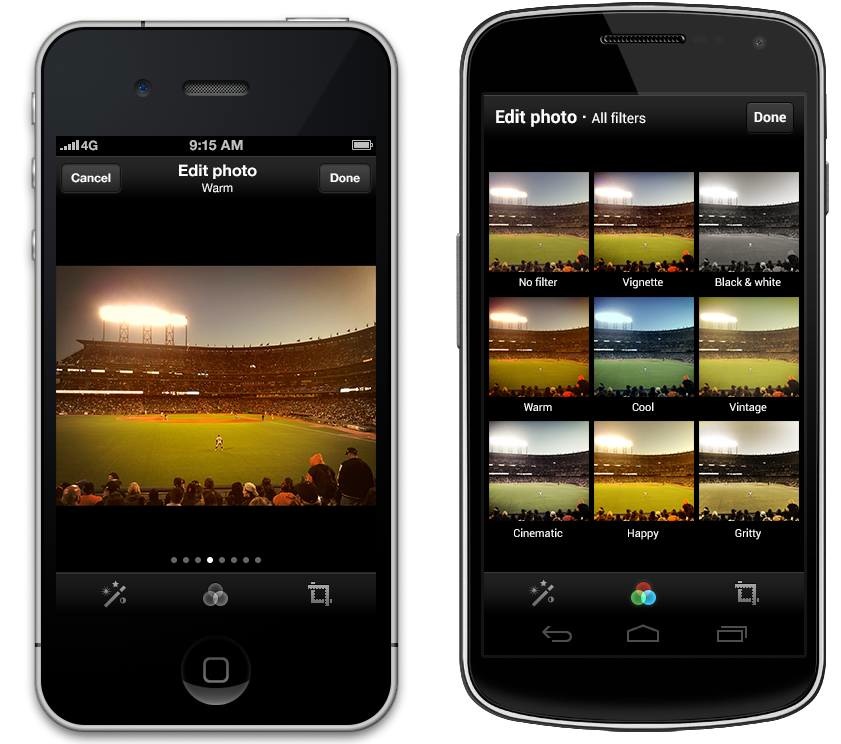 Twitter certainly knows their timing. Just as Facebook pushed an interesting Instagram update with improved photo editing/image taking features coupled with a brand new photo filter, Twitter too has updated its Android and iOS apps with – you guessed right – filters. Powered by Aviary, there are eight to choose from: Vignette, Black & White, Warm, Cool, Vintage, Cinematic, Happy and Gritty. Twitter makes it easy to choose one by comparing live previews in a grid view or by swiping through them.

The usual suspects such as various light and color settings should appeal to casual fans of iPhone photography. Those that totally hate fumbling with options can use the nice auto-enhance wand that automagically improves your photos so you don’t have to. Filters are a great addition to your social media toolkit: you can now snap a photo and touch it up quickly before tweeting, provided you’re a fan of Twitter’s mobile app. More info and a cutesy video can be found right past the fold…

Matthew Panzarino of The Next Web speculates that “work on the filters most likely began after Twitter’s interest in Instagram was cut short on its acquisition by Facebook”.

New touch ups, according to Twitter’s blog post, include:

• Filters – apply one of eight filters, ranging from black & white to vintage, to add a new look and feel to your photos
• Take a bird’s-eye view – see how each filter would affect your photo in a single grid view, or swipe through looks to compare your options
• Frame the action – crop and pinch to zoom in order to focus attention
• Auto-enhance – make your photos pop with balanced light and colors by tapping the wand

This is your video.

The new Twitter app is now available via Google’s Play Store. The updated iPhone/iPad build should follow shortly and will be available via this link.

It’s important to remember that Twitter has bigger plans with filters. The official iOS/Android apps may be the first to get these official photo editing capabilities, but certainly they won’t be the last.

As Cody told you, filters are also coming to Twitter’s official mobile clients as the micro-blogging service fights Facebook for page views on the social photography front.

oh and will we ever see a normal non enhanced, no filter, photo again?

With more than 200 Thanksgiving-related photos posted to Instagram each second, I guess Dorsey & Co. figured adding image editing features to the service should happen sooner than later.

It is no secret that Twitter and Instagram have been at odds lately over which services gets the upper hand in photo sharing on the web to become the primary source of viral snaps.

In the latest display of this growing rivalry, Instagram simply pulled support for Twitter’s feature which renders Instagram URLs in-line in a cunning move to boost its web presence at the expense of Twitter.

As a result, tweeting links to Instagram photos no longer makes it possible to view the snaps in-line on Twitter.

Mark Zuckerberg originally said that Instagram would continue sharing to Twitter, that still is true today. Obviously, things change as a company evolves and I don’t think we ever said nothing would change.

Whichever way you look at it, the fight for photo sharing on the web is on and the filters are the latest theater of operations.

Now grab your popcorn and go share some snaps online.