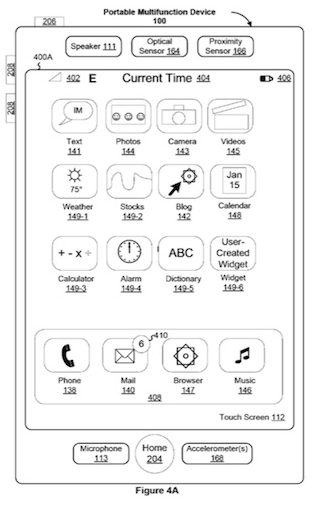 The ultimate smartphone patent which covers the intricacies of the iPhone’s touch screen heuristics has been preliminary invalidated by the U.S. Patent and Trademark Office (USPTO), reveals the FOSS Patents blog which covers intellectual property and litigation in the technology industry.

That’s bad news as USPTO in October also invalidated the famous rubber banding patent, Apple’s other prized iPhone invention. Now, all is not lost because many patent claims that are rejected at the early stage do ultimately survive, though the prospect of loosing the iconic multitouch patent is without any doubt a major concern for Apple, even with plenty of other multitouch-related patents the company now holds…

FOSS Patents has the story:

The invention in question is filed as a U.S. Patent No. 7,479,949 and covers “touch screen device, method, and graphical user interface for determining commands by applying heuristics”. It was granted in January 2009, based on a few patent applications filed in 2006, months before Apple publicly introduced the original iPhone.

Of course, Apple has plenty of other important smartphone patents, but this particular one’s a pretty big deal. The media and Apple’s own lawyers refer to it as the Steve Jobs patent because it covers the important touchscreen heuristics and Apple’s late co-founder is the first named inventor.

On a more positive note, some patent claims that are rejected at the early stage do ultimately survive, FOSS Patents explains. So-called first Office actions are based only on submissions made by those challenging the patent, but clearly whoever challenged Apple’s touch heuristic invention has just scored a small victory.

Though USPTO usually takes a tough position early on “in order to enable and require the patentee to present the strongest arguments in favor of validity”, FOSS Patents explains that it would be a mistake to “underestimate the significance of a first Office action”.

Also, a complete rejection of all claims of a given patent is potentially more devastating than one affecting only some claims.

But, should USPTO’s invalidation hold, Apple’s luck in the courtroom might take a turn for the worse. The iPhone maker successfully asserted this invention against both Samsung and Google-owned Motorola.

In October, an ITC judge deemed this patent valid and ruled against Samsung. Apple wasn’t so lucky with Motorola as Judge Posner declared large parts of the patent invalid and identified only minor potential infringement on Motorola’s part.

Should the first Office actions tentatively invalidating the rubber-banding and the touchscreen heuristics patents be affirmed at the end of the proceedings (after all appeals have been exhausted), Apple would lose two iconic patents, but it would still have thousands of other patents, including hundreds of multitouch patents.

Though the Steve Jobs patent wasn’t mentioned in Apple’s recent trial with Samsung, Motorola certainly couldn’t have wished for a better development.

Matter of fact, I imagine lawyers for the Google-owned handset maker are gonna have a field day over this particular invalidation.