So, you’ve been a good boy and are now keeping your fingers crossed that Santa will deliver your brand spanking new 27-inch iMac in time for Christmas? Not so fast. According to the online Apple store, deliveries of Apple’s top-of-the-line iMac model have just been pushed back to as far as January of next year. So, you’re looking at a minimum three-week delay, likely even more.

It’s not clear whether Apple is facing production difficulties such as low yields or perhaps it underestimated demand for the all-in-one computer, but clearly there will be no 27-incher for you this Christmas. Of course, you could be better served visiting one of Apple’s brick-and-mortar stores or retail outlets of Apple’s authorized distributors who may have a few 27-icnhers in stock…

For all we know, 27-inchers could now ship at the end of January.

Jordan Kahn of 9to5Mac reminds us that Apple previously gave a 3-4 week shipping estimate for the 27-inch desktop. As for the 21.5-inch iMac, Apple’s web store in the US and Canada cites a 7-10 business days delivery time. 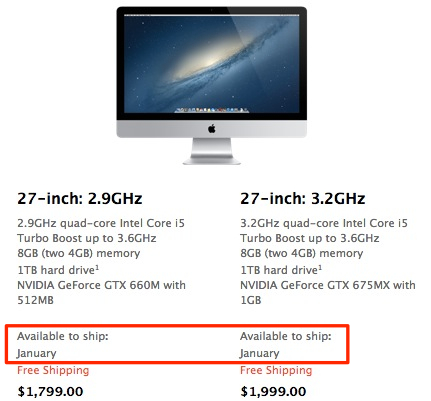 Apple CEO Tim Cook said ahead of the new iMac launch that Apple expected significant delays leading into the holidays. He wasn’t pulling this out of thin air: shortly after the new iMac lineup launch, Apple started pushing back estimated shipping times for both 21.5-inch and 27-inch models.

After all is said and done, it’s a pity Apple cannot make enough new iMacs for everyone in the run-up to Christmas. I’m guessing they’re facing problems in the supply chain or, worse, some kind of unforeseen issues with the manufacturing.

The redesigned all-in-one with its dramatically thinner appearance requires new production techniques such as friction-stir welding that contract manufacturers and suppliers might not have fully familiarized themselves with.

Such demand problems may become a thing of the past if Apple brings some of the iMac manufacturing back to the United States, as Apple’s boss promised.

As you know, a small portion of iMacs are right now being made in the U.S., apparently at the Freemont, California facility.

So, were you going to pick up a new iMac this Christmas?