Holding iPhones and iPads just where you want them is something of a dark art. There are more than enough docks, stands and foldable cases out there that claim to do the job and while most do just that, we’ve always hankered after something a little different.

When we saw the MobileMount on Kickstarter quite a while ago, we had a sneaky suspicion that we had found it. At first glance it was a car holder for a phone. Looking a little harder though suggested it could be much more than that. We were intrigued.

Since then, the Kickstarter project has come to fruition, and you can now pick up your very own MobileMount for just under $40. But should you? Let’s find out…

While the MobileMount can undoubtedly be used in a car, and that’s possibly where many will use it, we found the device just as useful in the home. Keeping an iPad in just the right place for swiping through recipes, or an iPhone on a night stand ready for that wakeup call were just two of the uses we found that we didn’t really anticipate when we took the MobileMount out of its box.

The mount itself consists of two suction cups. One attaches the mount to a flat, clean surface like a window or desk (or if you’re really lucky, a flat dashboard) and the other takes care of the device that’s being hoisted into the air. We’re talking iPhones and iPads, but this will obviously work with all manor of Android phones, Windows Phone phones and the like. 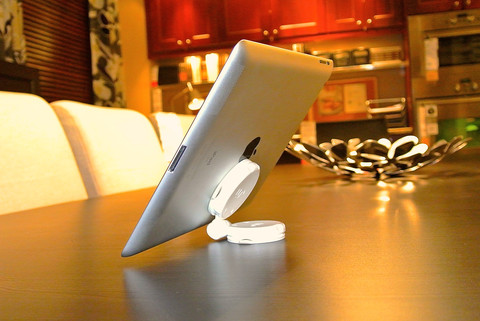 Whilst we’re at this juncture, it’s worth talking about the need for a flat surface just a little. As with all suction cups, a flat surface is preferable on both the device you’re attaching, and the surface you’re attaching it to. That said, the MobileMount comes with a collection of films that aim to make it work better with matte surfaces. We found that certain matte surfaces didn’t need the films at all, but they’re welcome additions for those that do, and they could be a lifesaver if your device is particularly mottled.

Once attached, the MobileMount is surprisingly strong given its diminutive size. Using not one, but two twist-to-lock mechanisms, the mount really grabs hold of anything it goes near rather than giving the impression it could all go very wrong at any given moment. We tried iPhones, iPads and a Samsung Galaxy S3 with no real issues. It’s not 100% perfect 100% of the time according to our testing, but it’s better than most.

If you’re looking for both, then you’d be daft to overlook it.