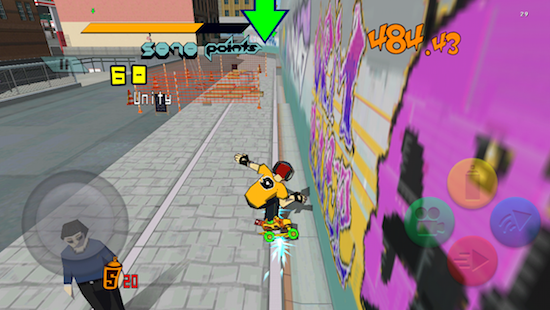 Jet Set Radio first popped up back in 2000 for the Dreamcast console. I didn’t play it then, but when its sequel, Jet Set Radio Future, came bundled with my original Xbox, I got hooked. So I was actually pretty excited to hear that Sega had ported the game to iOS this week…

“Tag, grind, and trick to the beat in SEGA’s hit game Jet Set Radio! Fight for control of Tokyo-to, mark your turf with graffiti, tag walls, billboards, and even rival gang members! Perform tricks and flips on magnetically driven in-line skates, but watch out for the local police force!”

Fans of the original game will be glad to hear that the iOS port features 29 of 30 tracks from the Dreamcast release. It also includes more than 10 characters that you can play with, and a large catalog of classic and new graffiti for you to choose from. Or you can create your own.

Jet Set Radio is a part of Sega’s Heritage Collection Series and it features support for Retina Displays and GameCenter. Early reviews say the graphics look great, but the controls are difficult to master. If you want to check it out for yourself, you can find it in the App Store for $5.

Will you be downloading Jet Set Radio?