The iPad mini is taking a bite out of sales of its full-sized counterpart. That’s the conclusion of one Wall Street observer, who found fewer seven-inch Apple tablets available than the larger 9.7-inch iPad. But is the finding a sign of cannibalized iPads or something else?

A poll of fifty Apple stores by Citi uncovered the mini available in eighty percent of the locations, but severely limited, except for the 32 gigabyte version. However, all stores checked had the new fourth-gen iPad in stock, just six percent reporting limited availability…

“While not explicitly asked, it is clear in our survey work that the iPad 4 is not selling well, cannibalized by mini sales,” Citi analyst Glen Yeung told investors Wednesday.

The iPad mini, a cannibal?

This isn’t the first time we’ve heard this argument.

Apple CEO Tim Cook has spoken on the issue, dismissing the issue by saying “It’s much better for us to do that than for somebody else to do it”.

Analysts have said the mini could consume up to one-fifth of iPad sales.

But Yeung makes a point that could refute his own argument about cannibalization. He estimates about ten million iPad minis and between ten and fifteen million other iPads were produced for the current quarter.

Doesn’t that reflect an in-built scarcity of around five million minis? And, is this a case of cannibalization or simply a supply issue?

We’ve reported that AU Optronics – one of the two companies supplying Apple mini displays – is having production problems. Although the company has disputed the claim, lower production of the mini could create scarcity on shelves. 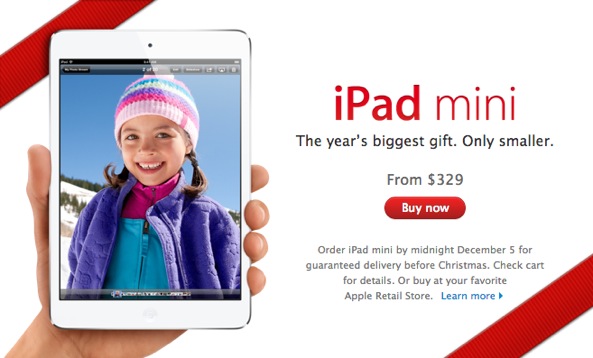 For Apple, the more troubling prospect is supply issues. After all, as Cook noted, cannibalization of one Apple product by another Apple product isn’t really a problem.

When the Microsoft Surface starts eating into iPad sales, then Apple execs may take notice. Recent surveys have indicated most people interesting in purchasing a mini are first-time tablet owners.

The real question for Citi and other Apple watchers is whether consumers unsuccessfully searching for an iPad mini purchase a rival device or another iPad?