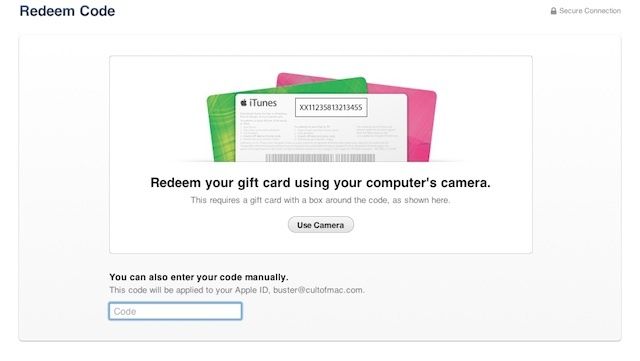 As we’re sorting through all of the major changes in iTunes 11, the Interwebs is starting to light up with reports of the little things and nice-to-haves that Apple did not include in the full changelog for iTunes 11. One of such features that I know will be hugely popular with parents and people who buy iTunes Gift Cards is the ability to redeem any such card with your Mac’s camera, without typing in a single character, just like that. It’s just one of those little things that make life more easier and enjoyable. Here’s how it works…

Kudos to Buster Heine of Cult of Mac for spotting this feature.

“Users can simply hold their giftcard up to the FaceTime camera on their Mac and iTunes will read the code and redeem the value for it”, he writes.

Simply fire up iTunes 11, go to the iTunes Store and click the “Redeem” link on the right side. The familiar-looking Redeem page will pop up, offerin a new option to use the Mac’s FaceTime camera to redeem the giftcard.

It’s an awesome feature, but Apple could have taken it a little further. For example, why not let me use the camera on my iOS device, in case I have an older Mac without a built-in camera (or perhaps it’s broken or whatever).

At any rate, I’m absolutely loving this feature. Stuff like this stands as a testament to why we love Apple and appreciate its engineers sweating over the little things.