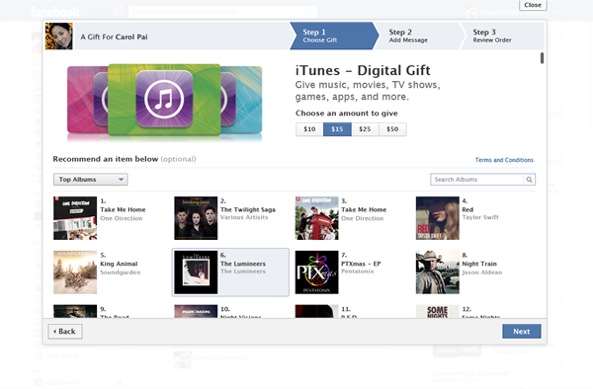 This just in: Apple and Facebook have agreed to make digital iTunes gift cards available on Facebook via the social networking giant’s Gifts platform. It’s pretty straightforward: simply select a desired iTunes Digital Gift Card and Facebook will charge the amount using the credit card on file. You can then choose a Facebook friend to send the card to. An e-commerce initiative involving Facebook and Apple: now, that’s something to write home about, isn’t it?

Be that as it may, it certainly blows my mind that Apple agreed to give up some of the revenue from these cards. And how could it not to: Facebook handles these transactions rather than the iTunes Store. By the way, the iTunes Gift Card is a $2 billion business annually…

Or, if you’re really old-fashioned, you could pick the real thing one over at Best Buy, with a nice holiday discount of fifteen percent, and have it mailed to your physical address.

It’s worth noting that Zuck & Co. recently partnered with Hulu, Pandora and Rdio on buying digital subscriptions through the Facebook platform. Another marquee partnership is the Starbucks deal which lets coffee lovers send cards to their friends via the service.

Mike Isaac of AllThingsD shares the math behind the iTunes credit deal, tapping Apple’s last 10-K which states the company generated $7.5 billion from the iTunes Store during fiscal year 2012.

Industry sources say that more than $2 billion of that revenue comes directly from iTunes gift cards. Sources also tell us that existing retailers who sell iTunes gift cards (like Best Buy, Target and the like) usually keep around 13 percent of each gift-card dollar sold.

So that adds up to around, say, a $260 million-dollar market size for physical iTunes cards split among participating retailers, of which Facebook will now be an active participant.

That pie is small compared to Facebook’s overall revenue ($3.71 billion in 2011), but another digital product with less overhead and high demand is definitely a win for Facebook’s Gifts department.

Apple will immediately benefit from having iTunes credits readily available to the 1+ billion people who use Facebook.

Now, I myself am not a big user of Facebook Credits. What’s more, I never even purchased a Gift on Facebook’s platform.

But with hot sellers like iTunes credits making their way onto Facebook’s virtual store shelves, there’s no reason not to consider buying a digital iTunes credit for a Facebook buddy.

Of course, you could also gift yourself an iTunes credit if you wanted to.