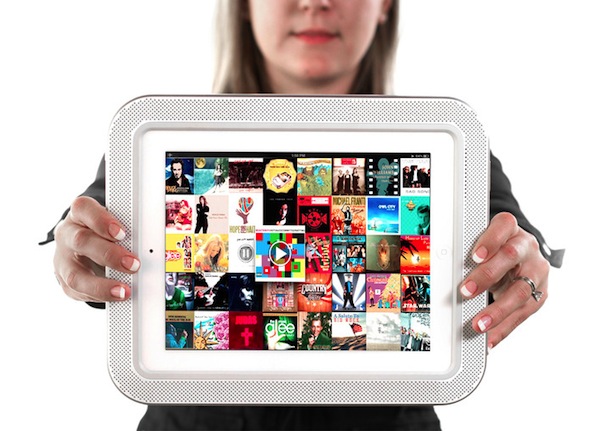 There’s a lot of things that the iPad excels at, like performance and screen quality. But it leaves a lot to be desired in the audio department. The tablet just doesn’t have the technology to deliver rich, full sound.

Obviously, there’s a number of accessories on the market today that fill this void, like the Jawbone Jambox. But none of them are as portable and attractive as the iPad itself. And that’s where ORA comes in…

The ORA is a new iPad case from OBJEKT, Inc. and it features a staggering 8 built-in, front-facing speakers. Each one has been meticulously engineered, and fine-tuned, to enhance your iPad audio experience.

The configuration delivers a wide stereo image, with sound 5 times the loudness of Apple’s tablet. It also features an integrated, rechargeable Li-Ion battery, that’s good for up to 10 hours of continuous usage.

But the team didn’t just want the ORA to sound good. It wanted it to look good too. Built with crafted aluminum and other durable materials, the case measures just 0.7-inches thick, and only weighs 13 ounces.

Unfortunately, it doesn’t look like the ORA is compatible with the new Lightning plug. So it’ll only work with second and third generation iPads. The good news, though, is that you can charge it with any 30-pin cable.

If you’re interested in the case, you may want to check out the Kickstarter project. A pledge of $99 will get you on the pre-order list, although that doesn’t include the handy kickstand cover you see in the video.

Sure, ORA’s 30-pin port is going to be a deal-breaker for some folks, as is its $99+ price tag. But for iPad 2/3 owners in the habit of using the tablet to play games/watch movies, this might not be a bad investment.

What do you think of the ORA?