If asked to single out a feature of iBooks that provokes most oohs and aahs, I’m sure you’d more or less unanimously opt for the page-turning effect. It didn’t take long before other e-book apps and devices began mimicking Apple’s animated skeuomorphism in iBooks.

The page-turning trick in various implementations has become a standard feature of Amazon’s Kindle apps, Google Play Books software, Sony’s recently released iOS app, plus a host of other social news readers and e-reading programs. And just like that, Apple’s now been granted a patent for the feature, meaning the company basically owns the page turn…

Earlier this week, the United States Patents and Trademarks Office published a document proving Apple was granted a patent for this feature.

The patent D670,713 entitled “Display screen or portion thereof with animated graphical user interface” outlines methods for flipping pages of an electronic book via devices like iPads and iPhones.

The ‘invention’ was highlighted yesterday by Nick Bilton of The New York Times.

The browsing device includes a controller that provides tactile feedback so as to lessen the user-interface differences between conventional books and e-books.

Sensors and control mechanisms in the controller generate a series of electrical signals that are interpreted by the computer that displays the e-book to control various browsing operations, such as flipping pages, controlling a rate of page flipping, jumping to pre-set locations in the e-book, etc.

Apple argues in the filing its page-turning solution differs from everything else out there in that it accurately renders how a physical page folds over when turned.

Here’s one of the illustrations from the filing. 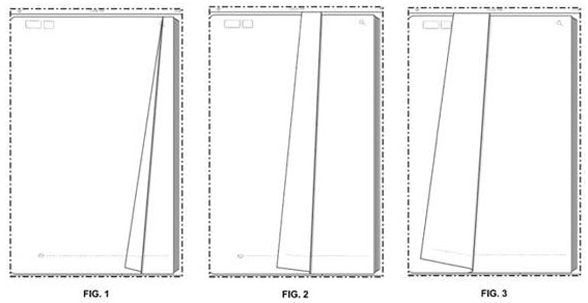 Apple is often criticized for holding patents for features like slide-to-unlock (and its variant), rubber-band scrolling and pinch zoom, to name a few. This, however, is taking the obvious to a whole new level.

It’s not that the animation of the page turn isn’t a user interface metaphor per se – it is. But it’s impossible to deny that it’s also the exact replica of something humans have had in physical form for thousands of years.

You’d be right to ask yourself how on Earth someone could gain a patent on such an obvious thing.

Be that as it may, I’m sure someone will come up with a workaround to Apple’s patent.

So, was Apple a tad over-zealous with this particular, ahem, ‘invention’?

Does it prove that today’s patent system is broken beyond repair?