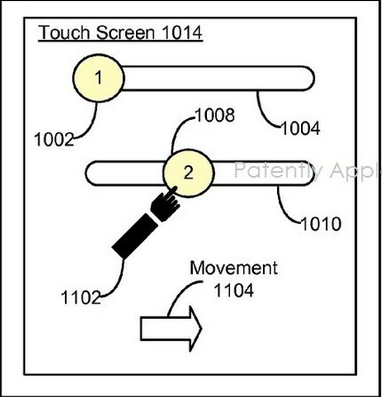 An interesting patent grant surfaced in the United States Patent & Trademark Office’s (USPTO) database this morning related to a two-step screen unlock feature. This is Apple’s second patent grant for the feature, with first patent issued in June 2012. One of the inventors listed on the second grant for a dual slider locking approach is Apple’s iOS chief and Senior Vice President Scott Forstall…

Apple originally filed this patent application in the third quarter of 2011.

All told, USPTO published a total of 27 Apple patent grants today, including three design patents and 11 utility patents that, among other things, cover the Apple TV set-top box, parallel computing on multiple processors, as well as translating, rotating and simultaneously translating and rotating multiple on-screen objects in a graphical user interface on a touch screen display.

A patent grant doesn’t mean the invention will ever see the light of the day.

As The new York Times reported Sunday evening, Apple has since 2005 been patenting everything and anything, to prevent another company from trying to patent the idea, even if it knew in advance many patent applications would never get approved.

Apple owns the patent for the iPhone’s slide to unlock feature and has successfully asserted it against Samsung and Motorola, forcing other handset makers to employ pattern unlock, face unlock and other methods of unlocking a portable device.

According to a former Apple engineer, the slide to unlock gesture “might seem obvious now, but that’s only after we spent millions figuring it out”, adding that “other companies shouldn’t be able to steal that without compensating us”.