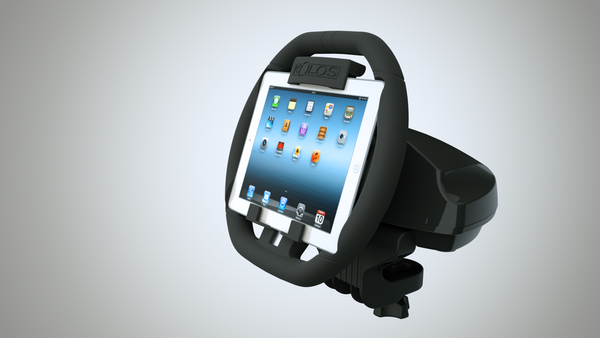 We’ve seen a number of gamepads built for iOS devices over the years, but this has to be the first time we’ve ever seen an iPad gaming wheel. In fact, the developers of the KOLOS say it’s the first of its kind.

The KOLOS holds on to your iPad with a single, padded clip and attaches to virtually any table or desk with its built-in clamp. The wheel also detaches from its base with a single click, so you can easily take it with you.

The steering wheel is made out of anti-perspirant rubber coating technology, meaning it won’t feel slippery in your hands, and the base is made out of high quality metallized plastic. The clamp is made from ABS.

As you’ve probably figured out by now, the KOLOS isn’t for sale yet. The developers say its ready for production, but are using indiegogo (similar to Kickstarter) to raise money to get things started. If you’re interested, a pledge of $50 will score you a steering wheel, and $85 will get you the whole setup including base and clamp.

I’m not quite sure what to make of this yet. It seems expensive. But I could see it becoming much more valuable in the future, as more games become Apple TV and AirPlay friendly. Then it’s essentially a console accessory.

What are your thoughts on the KOLOS?