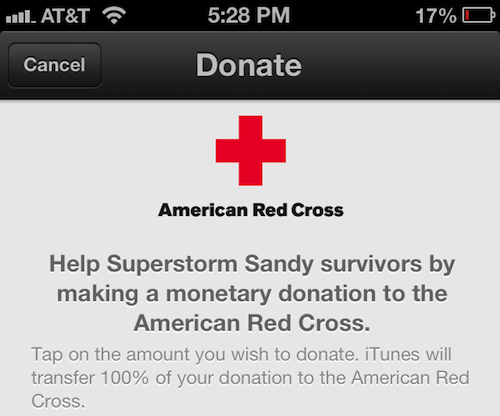 As most of you are aware of by now, the Northeastern part of the United States was hit by a superstorm this week. Hurricane Sandy tore through New York, New Jersey and other areas on Monday night, causing an estimated $60 billion in damages.

For those that are looking to help, Apple has teamed up with the American Red Cross to make it easy for folks to donate money to the relief efforts…

As noted by 9to5Mac, Apple has added a Red Cross donation portal to the front page of its iTunes and App Stores, specifically for Hurricane Sandy relief. Clicking it will take you to a donation page where you can make a contribution of $5 to $200.

As you would expect, the money comes directly from your iTunes account, so it’s fairly quick and painless. In fact, it’s only a three step process.

This isn’t the first time Apple has partnered with the Red Cross on collecting charitable donations. The two worked together on other major disasters including the tsunami that struck Japan in 2011, and the big earthquake that hit Haiti in 2010.