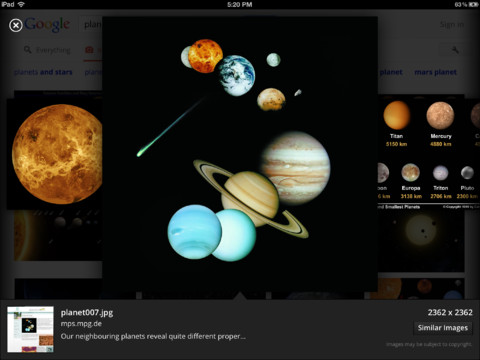 Google’s most advanced voice search has arrived on iOS! The company yesterday issued an update to its Voice search app for Android with new Google Now features for Android 4.1 devices. And today, the search Goliath has finally released a long-expected update to its iOS app. It brings a bit overdue iPhone 5 compatibility in addition to – and this is huge – the vastly improved voice search capability with artificial intelligence aspects akin to Google Now on Android Jelly Bean devices.

Give it a few more releases and this app is bound to compete with Apple’s Siri. Also on tap are the usual bug fixes and a few other tweaks and enhancements. It’s a free universal binary that supports all iOS form factors natively so make sure to update to the latest version. Jeff had a chance to take it for a spin, I’ve included his video hands-on right below…

Google touts enhanced voice searching that lets you both listen to the results of your queries and use your voice to ask natural-language questions. Previously, you were limited to word commands only. Yes, you can now ask stuff like “what’s the weather like in my area” and get meaningful results.

The company says you will enjoy “faster and significantly improved” voice recognition and mentions that text is “streamed on the fly”. More on voice searching in Google’s support document.

And, according to a blog post announcing the updated app, it now taps Google’s Knowledge Graph which “maps over 500 million people, places, and things in the real world”.

• “What does Yankee Stadium look like?” Google will show you hundreds pictures instantly.
• “Play me a trailer of the upcoming James Bond movie.” The trailer starts playing immediately right within Google Search.
• “When does daylight savings time end?” The answer will appear about the search results, so you can set your clock without have to click on a link.
• “Who’s in the cast of The Office?” See a complete cast list and find out who made you crack up last night.

Our own Jeff Benjamin has done some real-life tests, here’s his video.

This release has actually been in the pipeline for a while, per the below clip from August.

Google on August 8 announced intentions to bring its digital assistant from Android 4.1 over to iOS via an update to the Google Search app. Watchers wondered whether Apple would ever actually approve a Google-branded app aimed squarely at its own digital assistant, Siri.

That mystery has been now solved as Apple and Google have obviously resolved any differences that may have led to delaying the program. Pictured at the top is the attractive image search interface on the iPad. Below is a pair of screenshots depicting the Google Search app on the iPhone 5. 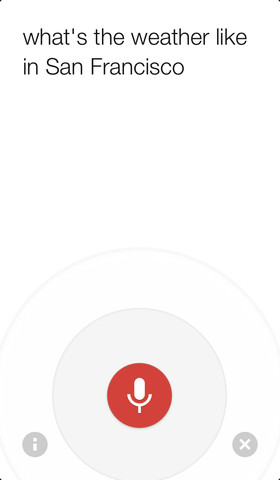 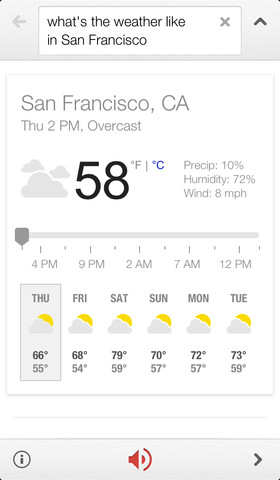 You should definitely give the new version a try.

I initially hesitated using the app back when it was first released. However, Google’s been improving it relentlessly up to the point where it’s grown to become my go-to search experience on the iOS. I just love the fluid interface, the simplicity and butter-smooth execution, especially when searching for newspaper articles and images.

And now, with Siri-like capabilities, the program in my opinion provides the best search experience on iOS there is. Updated your installation of Google Search and feel free to post your initial observations down in the comments.