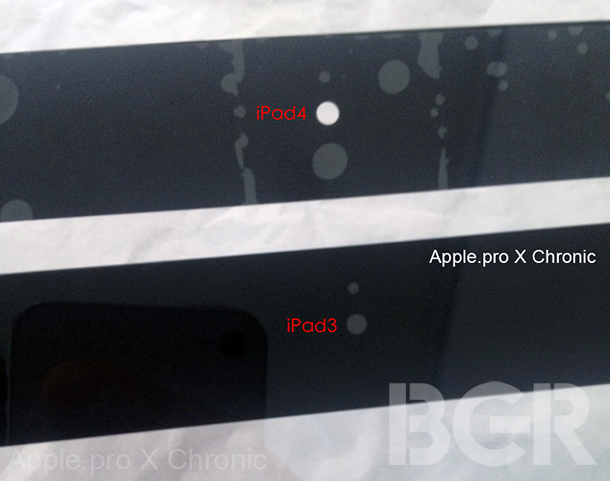 In addition to the iPad mini, and a handful of other announcements, Apple is widely expected to unveil a tweaked version of its current full-sized tablet at its media event tomorrow.

The retooled slate is said to feature a handful of changes, including Apple’s new Lightning connector, a global LTE chip and, if these images are legit, an improved FaceTime camera…

BGR posts a pair of photos tonight of what it believes is a display assembly from a refreshed third gen iPad, pointing to the larger camera sensor cutout versus that of the current model.

“The most noticeable changes we can see are the fact that the front-facing camera cutout is larger than the previous model, allowing Apple to include a bigger sensor. We’d bet that Apple will continue the 1.2 megapixel FaceTime HD camera from the iPhone 5 and iPod touch here.”

The site says it’s possible the display belongs to Apple’s next-generation tablet, which would assumably appear early next year. But it’s confident it’s a part from the aforementioned model.

If true, the retooled iPad looks like it’s going to be quite the upgrade over its 6 month-old predecessor, with new display technology, the new Lightning port and a FaceTime HD camera.

We’ll find out for sure tomorrow morning. Remember, the event kicks off at 10am PST and we’ll covering it and all other Apple announcements right here on iDB.

So, what do you make of this tweaked third gen iPad? Smart move on Apple’s part?