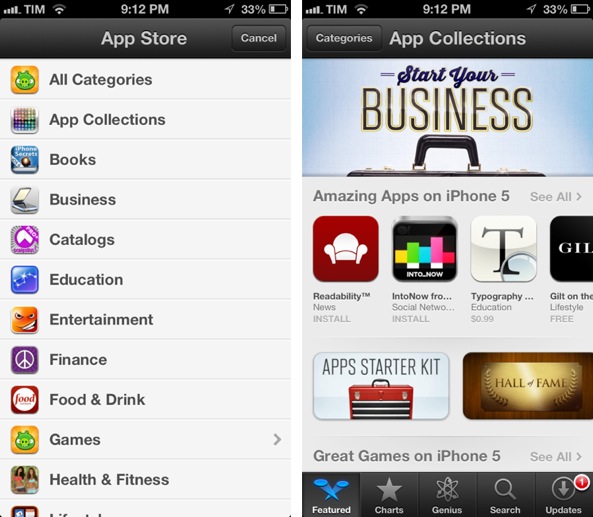 In its never-ending quest to improve app discovery, Apple with iOS 6 added to its App Store on the iPad, iPhone and Mac something called App Collections, a curated section which lists apps that the company personally tested. As of recently, App Collections are now prominently featured on iOS devices and Macs via a dedicated section nested within the Categories menu of the App Store and iTunes. All of the apps featured in App Collections are basically recommendations by Apple’s editorial team…

An up-to-date, lovingly curated collection of app bundles may become the best way for users to discover new apps. More importantly, app collections will put the focus on what an app does, rather than how it performs in the charts. It is a profound change for developers and users.

Based out in Europe, I can confirm that App Collections for the iPhone and iPad apps now appear within the Apps section on desktop iTunes, as depicted below. 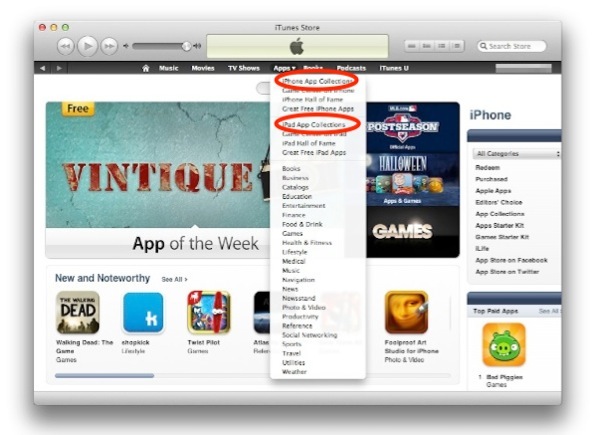 I wasn’t able to spot App Collections in the App Store storefront on my iPhone and iPad at the time of this writing, but suspect I soon will as these things usually take time to propagate.

Apple currently lists 20 app categories inside App Collections. Each of these listed categories is also individually promoted via large banners seen at various places in the App Store. App Collections just collects them together in one place and gives them a prominent link under the Categories section. 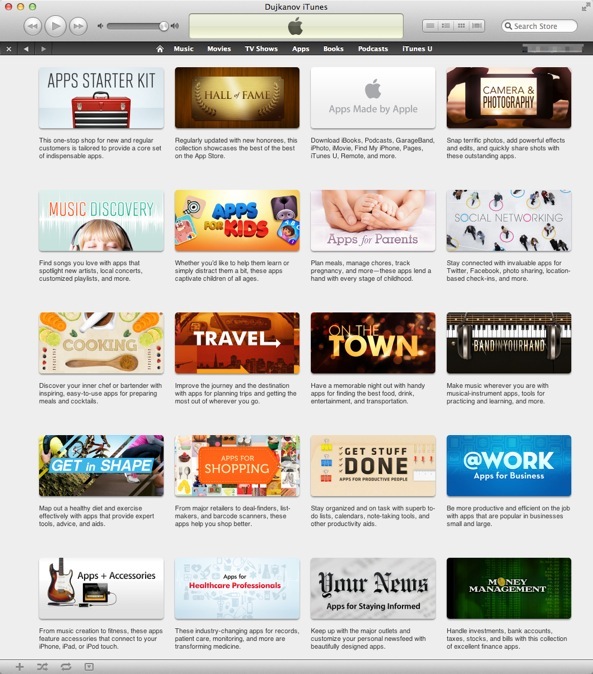 The listed app categories include:

With hundreds of thousands of apps on the App Store, how do you find the apps you’ll love using? You’re in the right place — we’ve gathered our favorites here. Every app in these collections is personally tested and recommended by our editors.

Whatever you do with your iPhone, iPad, or iPod touch — shopping, watching movies, editing photos, and beyond — you’ll find apps that work smartly and beautifully.

It’s a step in the right direction.

Still, lots more needs to be done if Apple wants to improve visibility for apps that don’t make it into the App Store’s highest-grossing charts.

Apple earlier in the month shut down both Chomp the web app and iOS app. As you know, the iPhone maker snapped up Chomp for its advanced discovery and recommendation engine in February. Two months later, the company pulled the Android version.

Disregarding various tweaks and under-the-hood improvements Apple’s been making to the App Store search algorithm and layout engines, the company has yet to figure out how to ease app discovery and make browsing more than 650,000 apps in the App Store a far less tedious affair than currently is.

Are App Collections live on your iPhone or iPad?