This year’s roundup of iPhone rumors, like many years before it, included chatter that the iPhone 5 would finally receive NFC technology. But as we found out in September, those reports were once again unfounded.

Despite the fact that several Android handsets support the wireless connection, Apple has yet to add it to its mobile products. But according to a newly granted patent, it may be working on some kind of alternative…

PatentlyApple points to a series of patents that were awarded to Apple by the United States Patent and Trademark Office yesterday. And out of those inventions, there was one in particular that stood out. 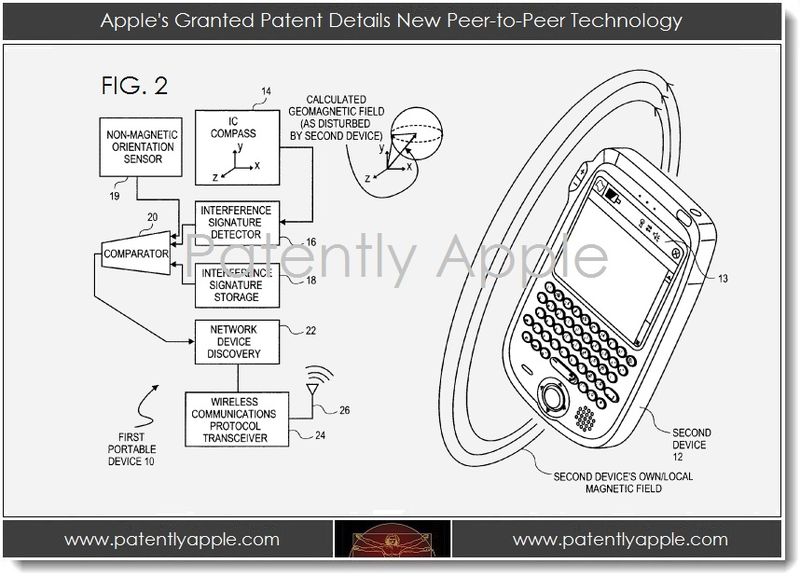 The patent covers a method and apparatus for triggering network device discovery, and involves a process within a portable electronic device that identifies itself for purposes of establishing communications with another device that is in proximity. It’s described as a peer-to-peer technology, similar to NFC.

“in accordance with Apple’s newly granted patent, a method for network device discovery monitors a compass output in a portable electronic device. As the portable device and an external device come closer to each other, a magnetic field signature is computed based on the monitored compass output. A determination is then made as to whether the computed signature could be associated with or implies that a previously defined type of electronic device (with which a network device discovery process can be conducted) is in close proximity.”

In other words, as the two devices get closer to each other, their magnetic characteristics cause the compass output to change in a way that implies that a network device discovery process should be initiated between the two devices. These detected changes can then be compared to previously stored patterns for recognition.

And what’s cool is, this method would be able to detect whether the compass output was another mobile phone, thus activating a Wi-Fi or Bluetooth protocol for sharing photos and other content (think AirDrop for iOS) or some sort of payment device, which would bring up Passbook or some other type of application.

All of this being said, Apple has been granted a number of patents regarding actual NFC tech. And it did just purchase a company known for its work in the field. But when asked why the iPhone 5 didn’t include the technology, SVP Phil Schiller said that it’s not clear that NFC is the solution to any current problem.

It seems pretty clear, though, that Apple has plans for NFC or a similar technology down the road.