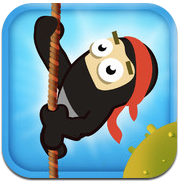 The best part of all everlasting iOS games is quick, addicting fun. In addition, easy controls and a lovable list of protagonists are always part of the equation. The Doodle Jumps and Cut the Ropes of the world all have a quick learning curve and endless fun with a little bit of complication.

The newest edition to the clan was launched around a year ago, but was updated earlier this month and has yet to hit primetime. Perhaps, let me be the first to introduce you to SuperRope, the hot new game, that isn’t quite new, or hot. Yet…

In SuperRope control any number of climbing creatures as you make your way up a hazardous set of ropes, vines, or beads. Each level has a specific set of challenges and falling obstacles to prevent your endless climb upward. Hopping from rope to rope, you grab hold of the next set and keep on climbing. Along the way, pick up helicopter hats and rockets… ahem… Doodle Jump….  ahem… and propel you way even faster. 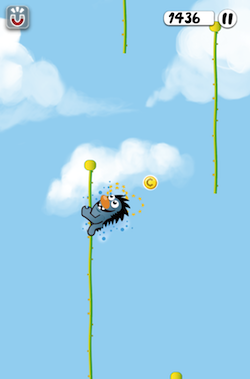 On your way up, collect coins, which are redeemable for new climbing characters or equipment upgrades. Using coins, the user can increase flight times or add to the attraction of the magnets, which will grab all nearby coins as you head to the sky. In addition to merely collecting coins, the game uses achievement based challenges, similar to Jetpack Joyride, to keep your head in the game.

The best part of the game is the short learning curve coupled with just enough challenge to keep you on the verge of frustration, but not so angry you want to quit. I downloaded the game last night and must have spent a solid 15 minutes leaping from rope to rope. Often, I’m in trouble with my wife for playing on the phone after the lights get turned off, but it is games like SuperRope that are worth the risk.

From the company that brought you games like Overkill and Monorace, head over and pick up SuperRope, which is currently free! At present, SuperRope is not on the top 200 list, but it may quickly earn its spot as one of the top downloaded games. The combination of fun, increasing challenges, and easy controls, make this game a must-have addition to the home screen.

My only regret is the amount of ads that pop up after playing each level. If there is a solid game, I am always happy to throw in a buck or two, just to keep the annoyance factor down. Stop reading and just go get it! I’m upset I’ve missed this one for a year.

Am I completely missing the boat on this one? Did everyone already play this game and get over it? If so, send me some recommendations in the comments, @jim_gresham, or meet me on  Game Center as “xeqshunr”