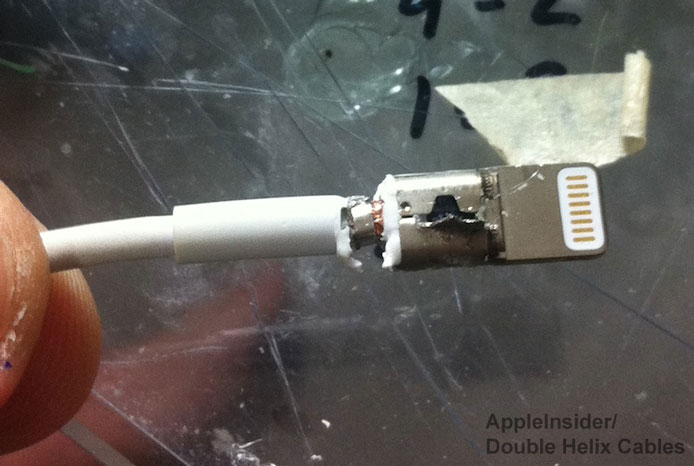 Apple’s new Lightning connector, currently utilized on the iPhone 5 and the new iPod touch and iPod nano, features an authentication chip, also found inside the Lightning cable. The chip, along with tightened ‘MFi’ terms, exists to ensure that only Apple-authorized Lightning accessories (like the Lightning to 30-pin adapter) function with Lightning-equipped iOS devices.

Some folks suspect it also serves to prevent third-party alternatives offered by places like Alibaba.com. I guess Apple won’t be too pleased realizing that cracked chips which bypass its authentication functions are now reportedly available…

As previously reported, Apple’s authentication chips assist with dynamic assignment of pin functionalities in the connector and converting signals received through the connector for output at the other end of the cable.

iPhone5mod did, however, inform us that they have also obtained cracked chips that bypass Apple’s authentication functions and that the cracked chips are working just as well as the original chips, suggesting that we may soon see a significant increase in unauthorized third-party Lightning accessories.

If history is indication, Apple’s legal team no doubt will be after unauthorized third-party Lightning accessories.

What do you think, could have Apple introduced a smaller dock connector without exercising so much control over accessory makers?

Is Apple putting a chip inside to prevent unauthorized accessories from damaging your iOS device or just to squeeze more money out of accessory vendors?

By the way, iPhone5mod’s Lightning cable and dock are just $39 and available now.