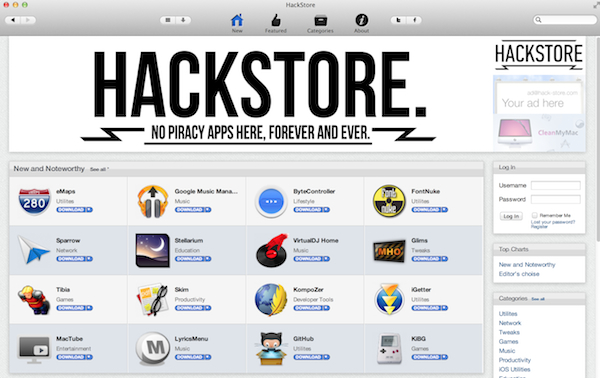 Back in April, a handful of developers launched the HackStore, an alternative to the Mac App Store. Similar to Cydia for iOS, the HackStore hosts third-party Mac applications that for one reason or another didn’t make it past Apple’s approval process.

In our first take, we noted that while the Store looked good, it needed some work. It was a bit buggy, and only contained around 50 apps. But after nearly 6 months and a number of updates, we figured it was time to give the HackStore another run-through…

When trying out a new application, there are two major things I look at: design and functionality. Design is the first thing you see when you load up an app, so it’s very important. If your app looks terrible, I’m probably going to delete it right away. 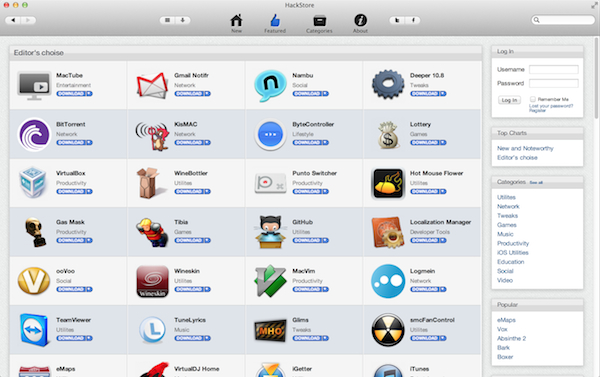 In the HackStore’s case, the overall design is great. It’s clean, sharp, and as you can see, it looks almost exactly like the official Mac App Store. This makes it extremely easy to navigate, with links to “New,” “Featured” and “Categorized” apps accessible from any screen.

But that doesn’t mean it’s perfect, as there are certainly opportunities for improvement. For instance, I’ve noticed a few grammatical errors throughout the Store, such as the section labeled “Editor’s choise.” And the UI is definitely lacking the polish that you see in higher-quality apps. These are minor details, sure, but they do take away from the Store’s credibility.

While design is the first thing you see when you open up an application, its functionality is the most crucial. A pretty UI might convince you to try an app, but if it doesn’t work correctly, you’ll still end up deleting it.

For what it is, the HackStore works great. Apps are presented as icons, which, when clicked, will take you to a screen with more information and a download link. I found downloading apps to be both painless and reliable. The software installs directly into your Mac’s Applications folder, which is a nice touch, and I haven’t encountered any issues with broken links. 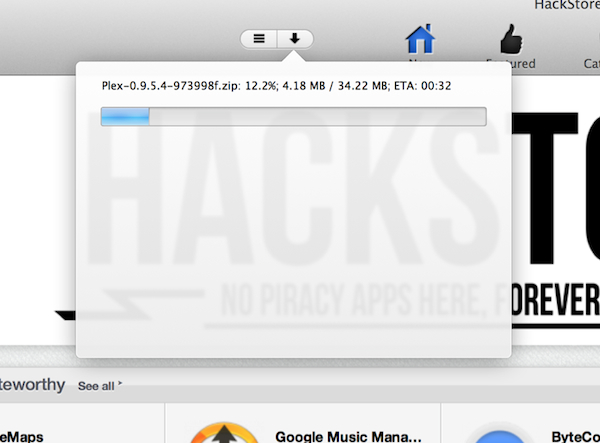 And updating applications is just as easy. There’s an “Updates” icon at the top of the HackStore that will show you if there are any updates available for your installed apps. I was only able to try this out a couple of times, but again, it worked as advertised.

Unfortunately, the HackStore’s functionality stops all together once you’ve downloaded the 20 or so useful applications — software selection is still a major problem here. Though there seems to be quite a bit more apps available now than there was at launch, I’d wager that there’s still not more than 100 of them, which is extremely low. I said it 6 months ago, and I’m going to have to say it again, I’m just hoping that this number improves over time.

Just like the title says, the HackStore has become a viable alternative to the Mac App Store. It has a clean, familiar UI, and it contains a few really handy applications.

That being said, it still lacks the polish and app content it needs to make it a top contender in the category. Just look at other App Store alternatives, like Bodega, and you’ll see what I mean. The HackStore still has a lot of work ahead of it. But at least, for now anyway, it’s still in the game. It’ll be really interesting to see where it’s at in another six months.

If you want to try it out for yourself, you can download the HackStore. Remember, it’s only available for OS X 10.7+ Mac users, and if you’re running Mountain Lion, you’ll have to enable the “Allow applications from anywhere” option for it to work.

If you’re a developer looking to upload your own app to the Store, you can do so by clicking on the HackStore menu in the task bar, and selecting Upload App/Update.