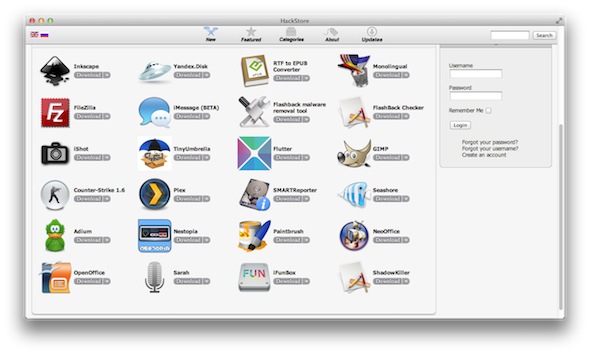 Cydia has become a household name in the jailbreak community over the past few years. The underground app store has withstood the tests of time and competition to become the de facto source for apps, themes and utilities that aren’t allowed in the official App Store.

Last night, a similar app store launched for the Mac platform called HackStore. No, it doesn’t include the same apps and tweaks that you’ll find in Cydia. But it does contain apps and utilities that Apple wouldn’t normally approve for its official Mac App Store…

The HackStore app itself actually looks pretty good. It bears a striking resemblance to the actual Mac App Store, so it feels right at home in OS X. Downloads happen fairly quickly, as do app updates. And just like other app stores, both are initiated from within the app.

There are, however, a few caveats here. Because the HackStore is still in its infancy, there are only about 50 apps to choose from. I’ve also encountered a handful of glitches in my few hours with the app. But hopefully these issues will be ironed out in future releases.

For a first go-round, the HackStore is pretty impressive. It’ll be even more so if it can manage to stick around and gain developer support the way that Cydia has. But it’s not like it doesn’t have competition. Bodega, a similar solution, has been around for quite a while.

What do you think of the HackStore?