Last week we saw a preliminary teardown of the 16GB iPhone 5 peg its bill of materials (BOM) at $168. This number is essentially the sum of the costs of all of the handset’s parts.

Today, however, a second teardown has been released, claiming that the BOM for Apple’s new entry-level handset is a bit more than that. It says that number is closer to $200… 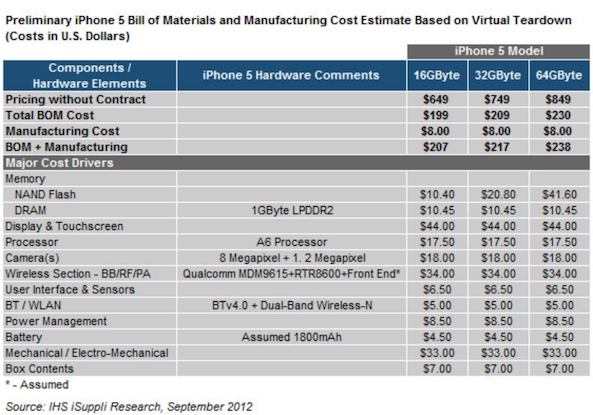 9to5Mac points to a new report from iSuppli, a marketing research firm with an expertise in supply chains. As you can see in the above chart, it has broken down all of the parts that make up the iPhone 5, and what they cost.

“With the base model carrying a $199.00 BOM, the iPhone 5’s components are expected to be slightly more expensive compared to the iPhone 4S model,” said Andrew Rassweiler, senior principal analyst, teardown services, for IHS. “The low-end iPhone 4S with the same memory density as the base-model iPhone 5 carried a BOM of $188.00, according to a preliminary estimate issued by IHS in October 2011.”

Like TechInsights mentioned during its teardown last week, iSuppli points out that the rise in costs can be attributed to new components like the 4-inch in-cell touch display, and the Qualcomm LTE chip. iSuppli and TechInsights disagree on the cost a little bit, but either way, it’s gone up since last year.

The reason people like to take a look at these numbers is to try and determine what Apple could make per handset. Obviously, there’s hundreds of unknown variables here, but the BOM still works as a jump off point.

Apple’s profit margins are the stuff of legends, especially in the smartphone industry. Typically, Apple accounts for more than 70% of all mobile phone profits thanks to its supply chain prowess and influence.

And it looks like this will continue on with the iPhone 5. Even if you factor in costs for things like manufacturing, which iSuppli says adds about $8, shipping and marketing, Apple still stands to make some a lot of money.