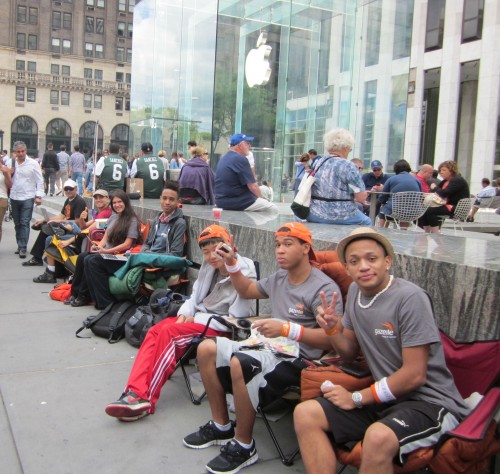 If you weren’t able to place your iPhone 5 pre-order last week, and still want to pick one up on launch day, I have some good news and some bad news for you.

The good news is, Apple and other retailers will start offering the handset this Friday at 8 AM. The bad news is, it looks like some folks are already lining up…

Fortune reports that an iPhone 5 line has formed outside of Apple’s Fifth Avenue store in New York City. Folks started showing up around 8AM last Thursday.

Now, waiting outside for 8 days for a phone to launch sounds pretty extreme, but it sounds like these folks are hoping for more than a handset. Out of the seven people that Fortune talked to, six of them were there for promotional purposes.

A couple of the guys are hoping to get exposure for their new social media startup. And there’s also a few musicians. And then of course there are some folks in line hoping to either sell their place, or sell the iPhone 5 to folks with less patience.

Waiting in line for new Apple products has become quite the cliche over the past few years. So much so, in fact, that Samsung uses them as a setting for its TV spots.

But if waiting out in the elements for days isn’t really your thing, as aforementioned, the iPhone 5 goes on sale this Friday, at several retailers, at 8AM local time.