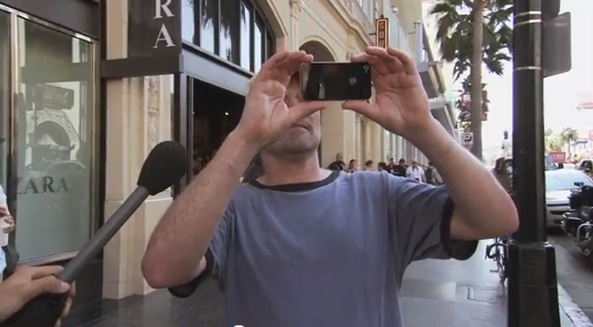 “How will people know that I upgrade?”, asked rhetorically a guy standing in the line for a new iPhone in Samsung’s anti-Apple ad from last November. Breathing new life into the “iPhone is boring” meme, ABC’s Jimmy Kimmel sent the camera out on the street to ask people to check out the new iPhone 5 whereas in reality they were looking at the current iPhone 4S. Apparently, a lot of people are willing to believe that an iPhone 4S is the iPhone 5…

Not sure if this is fake, but it wouldn’t surprise me that the general public would confuse the iPhone 4S with the new iPhone 5.

Here’s Kimmel’s hilarious take on what ordinary Joes think of the iPhone 5 update (via Steve Troughton-Smith).

You gotta love a guy describing the handset as a little thinner with the screen a little bigger. Another one says it’s a lot lighter and faster as well.

I guess those people were reading the same blogs as Apple’s lawyers.

Check out the iPhone 5 keynote compressed into four minutes.

Is this experiment fake or real?