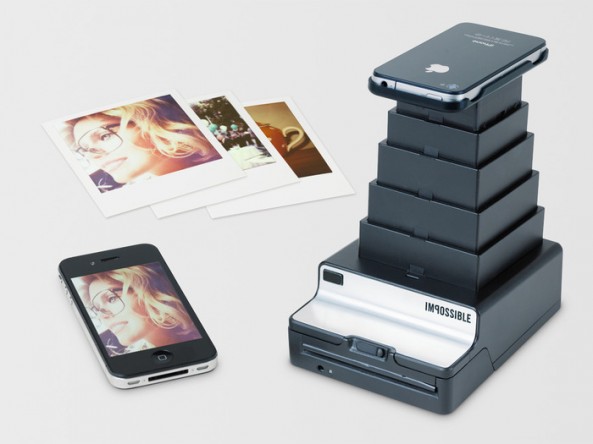 Imagine being able to take a picture on your iPhone, and then quickly turn it into a Polaroid picture without having to connect the handset to a printer. Now stop imagining. Such a product exists. Well, sort of.

Introducing the new Impossible Instant Lab, a new Kickstarter project. It’s essentially a printer that can grab pictures from an iPhone and then quickly turn them into real photos. You have to see it to believe it…

The Impossible Instant Lab is the brainchild of the Impossible Project. The group loves instant photography so much, that they bought the last Polaroid factory to save the instant film, and have created this.

The design of the Instant Lab was fashioned after the Polaroid SX 70. It stands 2.4″ tall when collapsed, and 6.9″ when in use (expanded). The film development is handled by a micro processor, and the included Li-Ion rechargeable battery can go 150 development cycles on a single charge. The printer will take instant film from both Polaroid 600 and SX 70 cameras, and will work with the iPhone 4, 4S and 5.

Currently, there are just a few working Instant Lab prototypes, but the Impossible team is hoping to start mass production with Kickstarter’s help. At the time of this writing, the project is at $150,000 of its $250,000 goal.

Unfortunately, it seems the $149 pledge option is sold out. But you can still score an Instant Lab for $189, which is $100 less than the printer is going to sell for in retail stores. Units are expected to start shipping next February.

The Impossible Instant Lab seems a bit expensive, but it carries that “are you for real?” factor. It also, once again, proves why we’re Kickstarter fans. Here’s another crazy idea that appears to be on its way to market.

What do you think? Good idea, bad idea?