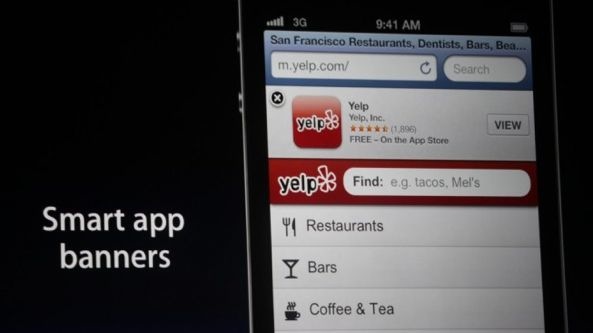 iOS 6 comes with a handful of nice little Safari tweaks that one discovers and learns to appreciate over time. Among them, so-called Smart App Banners that let web sites display an interactive banner at the top of Safari to promote their associated App Store apps.

The new feature does require some work on part of web developers who will need to add code to tap the app launching UI and functionality portion of Smart App Banners.

Conveniently enough, with just five days until the iPhone 5 unveiling next Wednesday, Apple has turned on Smart App Banners on its online store…

I was first alerted of this on Twitter two days ago, and subsequently today by our reader Ben Madison.

With iOS 6 and App Banners in Safari, whenever you visit a website that has a native app, you’ll be subtly enticed to use that instead of the web app that usually comes laden with Google ads.

It’s another way of sticking it to Google and ensuring that folks use native apps instead of their web counterparts.

I live in Europe and was able to confirm a Smart App Banner for Apple’s own Apple Store iPhone app popping up when I visited the online Apple store at store.apple.com using the iOS 6 Safari browser. 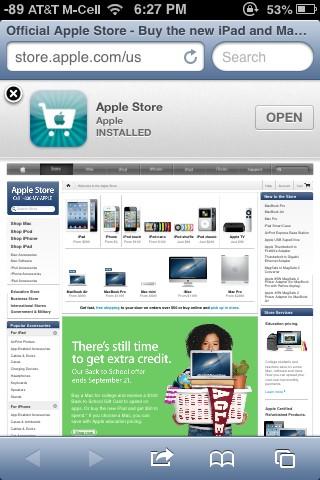 If you have the app in question installed, just hit the Open button on the Smart App Banner to launch it. If not, there’ll be a View button which will take you to the app’s page in the App Store.

Also cool: the Smart App Banner will show iTunes ratings for an app not installed on your device.

iOS 6 should be ready for public consumption by the time the iPhone 5 hits store shelves. The device is said to hit the U.S. on September 12 (Sprint might get it the following month).

If history is an indication, Apple will release iOS 6 a couple days in advance to avoid straining its activation servers on launch day.

The company announced earlier in the week that the next iPhone is “almost here”, inviting journalists to a press conference scheduled to take place on next Wednesday, September 12, at the Yerba Buena Center for the Arts at 10:00 am.

What do you think of Smart App Banners, are they useful or distractible?