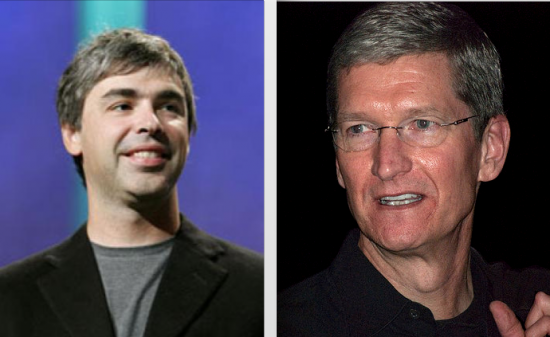 If you’re getting as tired of all of the patent lawsuits as we are, then you’ll happy to hear that Google and Apple have opened the lines of communications regarding intellectual property matters.

A new report is out this morning claiming that Tim Cook, and Google’s CEO Larry Page, have been involved in behind-the-scene talks over a range of things, including mobile patent disputes…

Reuters has the scoop:

“Google Inc CEO Larry Page and Apple CEO Tim CEO Tim Cook have been conducting behind-the-scenes conversations about a range of intellectual property matters, including the ongoing mobile patent disputes between the companies, according to people familiar with the matter.

One of Reuter’s sources says that one possible outcome of the negotiations is some kind of truce involving disputes over basic features and functions in Google’s Android operating system. But it’s not clear if Cook and Page are discussing a broad settlement, or something more specific.

The news of the talks certainly comes at an interesting time, as tensions between Apple and Google are running high. Not only has Apple recently started publicly distancing itself from the search giant, but its recent scuffle with Samsung is believed to be a warmup for their inevitable court battle.

Either way, we’re just glad it’s happening. Imagine a world where Apple and Android partners compete for customers in the smartphone space without all of the litigation. Hey, it could happen.

What are your thoughts on Cook and Page talking?