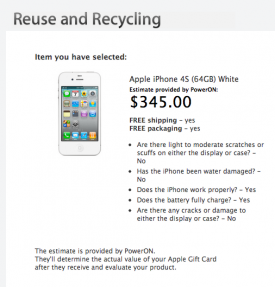 Most are confident we’ll see the iPhone 5 in mid or late-September. Because Apple isn’t a blabbermouth about such things, its fans are left reading tea leaves looking for hints to divine Cupertino’s exact intentions. The latest signal comes from the mothership itself. Apple will pay up to $345 for your old iPhone 4S.

The Apple Store is making the offer as part of its support for recycling old technology. Your gently-used 64GB white iPhone 4S could net you a $345 Apple Store gift card, while a 16GB black 4S will recycle $285 into your pocket. Apparently, Apple is hoping you’ll use your windfall to buy the new iPhone 5.

Apple is not the first to buy your old 4S. Amazon reportedly will pay $500 for the 64GB white 4S. Apple and Amazon are among a number of retailers preparing for the iPhone 5. For its part, Apple said it will resell the gently used 4S or will break down battered iPhones for recycling.

Finding something to do with electronic gadgets once they die or become obsolete apparently is a big problem. Cell phones alone account for 1 billion devices of the 40 billion tons of electronic waste which piles up each year internationally, according to the United Nations.

What do you think? Is this a good deal? Are you planning to recycle your iPhone 4S, or give it to a worthy person?