Last week, T-Mobile announced that it was going to begin offering truly unlimited data plans on September 5th. It says the plans will work in conjunction with 4G data speeds, and promises that users will never be throttled.

Well, good news today for current or potential iPhone customers on the network. According to a new report, the carrier is about to start offering 4G micro SIM kits, compatible with its unlimited plans, for unlocked iPhone users… 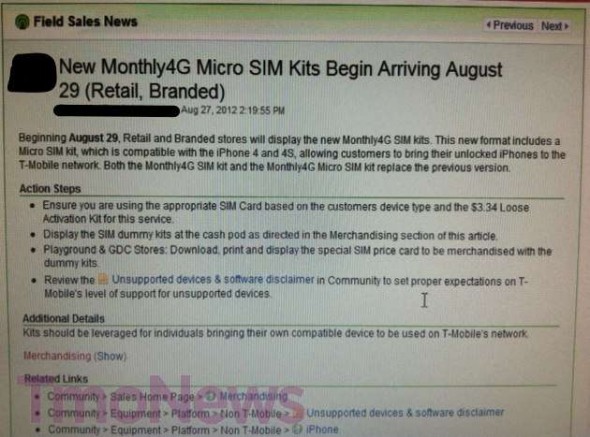 TmoNews received the above leaked internal memo meant for T-Mobile employees regarding the carrier’s launch of Monthly4G micro SIM kits. The kits will be arriving on August 29th and will be compatible with iPhone 4 and 4S models:

“Beginning August 29, REtail and Branded stores will display the new Monthly4G SIM kits. This new format includes a Micro SIM kit, which is compatible with the iPhone 4 and 4S, allowing customers to bring their unlocked iPhones to the T-Mobile network. Both the Monthly 4G SIM kit and the Monthly4G Micro SIM kit replace the previous version.”

In addition, the site has received some documentation regarding upcoming trainings for T-Mobile employees. Interestingly enough, among other items, there is a section in the documents entitled “Selling against the iPhone.”

So T-Mobile is going to start offering new micro SIM kits for unlocked iPhones, and it’s going to start teaching its staff to sell against the handset? Looks like the carrier is going to be again be left out of Apple’s fall activities.