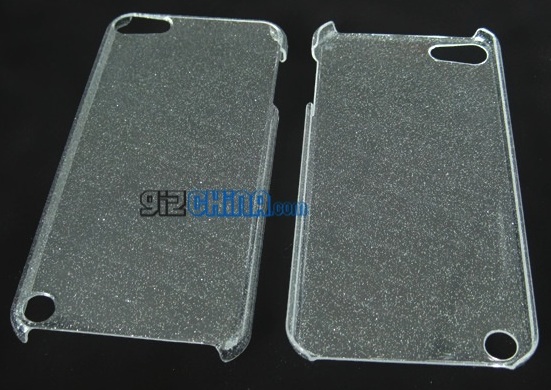 Though we’ve seen a handful of leaked front panels that reportedly belong to the next-gen iPod touch, information regarding the mp3 player has been extremely scarce as of late.

But that changed today, as photos of what are believed to be cases for the new iPod touch surfaced on the web. The cases suggest, among other things, the device has been redesigned…

GizChina (via MacRumors) published the photos:

“As you can see from the photos these cases suggest that the next-generation iPod touch will have a new design (at least to the rear) and seem to have a much less pronounced taper to the edges when compared to the current iPod touch 4.

The cases could also give away possible details as to the spec of the 5th generation iPod touch 5. The hole around the camera area to the left for example looks to have been elongated and tapered to fit around a possible LED flaw to help with low light photography, and there is also the appearance of a new ‘mystery hole’ in the lower left hand side of the case.”

A July report from Japanese blog Macotakara pointed to a similar mystery hole on the rear of the iPod touch, which is believed to be either a rear microphone, or a new speaker.

That same report also called for the device to have a redesigned back casing, the A5 system-on-a-chip from the iPhone 4S, and the same elongated 4-inch display used in the next-gen iPhone.

On the iPod nano front, 9to5Mac points to a new report from, again, Macotakara that suggests that the low-end mp3 player will be getting Wi-Fi connectivity this year to facilitate iTunes downloading. It’s believed that the new nano will also be getting a makeover this fall, sporting a taller design.

It was all-but-confirmed today that Apple will be holding two separate media events in the next two months. We expect to see these new iPods appear in the second, October-based event, alongside the new iPad mini.