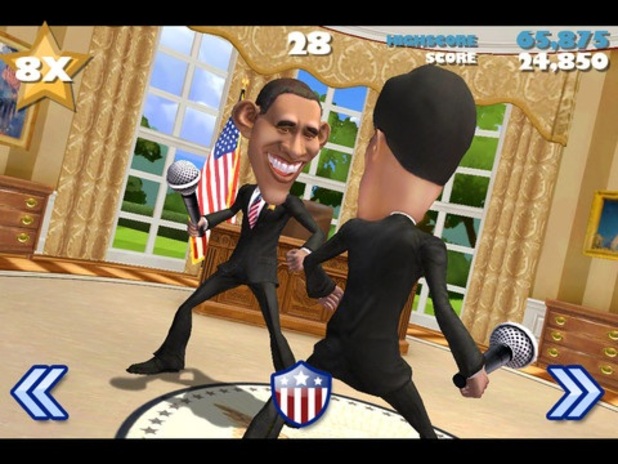 We’re in the middle of an election year here in the US, and come November, we will have a new President. But until then, we will be forced to endure countless hours of debates, political TV ads and who knows what else.

Luckily, the folks over at Chair — the team behind the popular Infinity Blade franchise — just released a game to help us cope with all of the stress of the election. It’s called VOTE!!!, and it’s actually pretty fun…

From its App Store description:

“From the creators of the bestselling and award-winning Infinity Blade series, play as President Obama or Mitt Romney in a slapstick battle for the White House. Equip your candidate of choice with a variety of iconic American outfits, accessories and items. Use your skills to unlock score boosters, win votes and rack up the top score as you campaign for victory.”

If you’ve ever played Infinity Blade, you’ll feel right at home with VOTE!!!’s controls and gameplay. It uses a very similar style of swipe-in-slash combat that, if timed correctly, can lead to high-scoring combos and victory.

The game is every bit as ridiculous as it looks. There’s some 30+ accessories you can use to outfit your candidate, ranging from eye patches to mustaches. And there’s loads of goofy sound effects and bad Obama impressions.

Nevertheless, the game is briefly enjoyable, especially when you consider its price tag. You can find VOTE!!! in the App Store for free.

Have you played VOTE!!! yet?