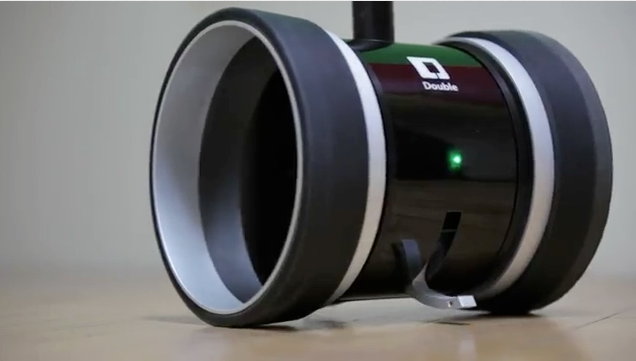 We’ve seen a lot of cool accessories for the iPad over the years, but this one might just take the cake. Double Robotics has just unveiled a new self-balancing motorized stand for Apple’s tablet called the Double.

The stand uses the iPad for propulsion, as it wheels around on a Segway-like base. And the whole thing is controlled by a second iPad, using the camera on the first for guidance. You really have to see it to believe it…

As you can see, the Double is built to offer telepresence of sorts — the appearance of being in a place other than your true location. The remote control iPad sees everything that the Double sees, and vice versa.

The possibilities seem virtually endless for this kind of technology. Imagine professors being able to teach classes from the other side of the world, or a doctor helping with surgery, from thousands of miles away.

But it doesn’t seem like we’re quite there yet. The quality of the front-facing camera on the iPad is still awful. And at $1,999 a pop, plus the cost of two tablets, these things are still a bit too pricey for most folks.

Nevertheless, they are pretty awesome. And if you happen to have two grand laying around, why not go for it? Double Robotics is take pre-orders right now, and hopes to start shipping these things by December.