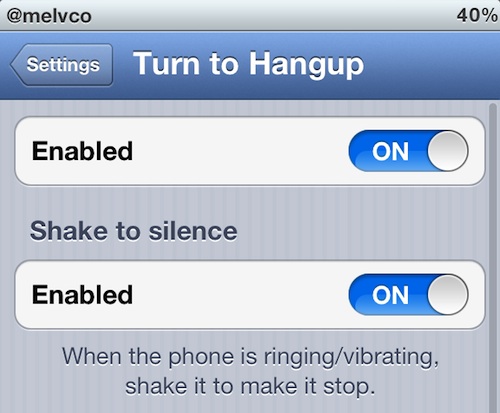 One of the many benefits of having a jailbroken device is the ability to add functionality to it. And there are countless tweaks available that can make the easiest tasks, even easier.

Such is this case with this next tweak, called Turn to hangup. As the name suggests, it makes dismissing an incoming iPhone call as easy as flipping over your handset…

Turn to hangup is your typical tweak. It doesn’t have a Home screen icon, but you can access all of its options in the Settings app. In this case, there’s just two of them. The first one is for enabling the Turn to Hangup option, and the second is for the Shake to silence feature.

In my handful of tests, both features worked great. Turning my iPhone over and laying it facedown on a surface effectively declined phone calls, and I didn’t have to shake it too hard to silence the ringer.

While Turn to hangup isn’t groundbreaking, it’s a nice complimentary tweak for folks who receive a lot of phone calls. If you want to check it out for yourself, you can find it in the Big Boss repo, in Cydia, for free.

What do you think of Turn to hangup?