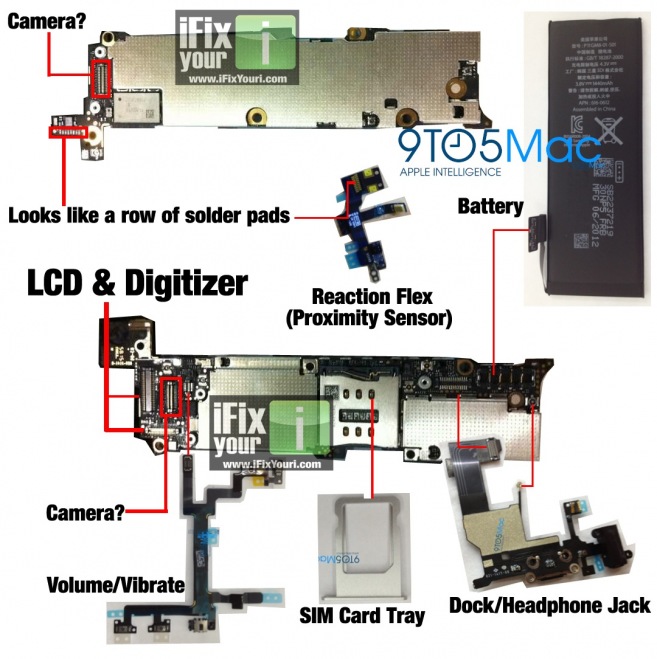 At this point, there doesn’t seem to be many details regarding Apple’s new smartphone that we don’t know. We’ve seen dozens of leaked internal and external parts, and there’s growing evidence that these pieces are in fact legitimate.

Still not convinced? Then check out the above diagram, put together by the iPhone experts over at iFixYouri. The image shows that many of the previously leaked next-gen iPhone parts fit perfectly in the recently-leaked motherboard…

9to5Mac, which has been leading the charge of leaked iPhone 5 parts since it published photos of its back covers back in May, reports:

..One of the biggest points to note is that many of these leaked parts fitting together nicely on the motherboard (obviously, image size aside) probably means that these parts are legitimate.”

Despite the evidence, we’ve noticed a growing amount of skepticism regarding the legitimacy of these components. This has easily been the most part leaks we’ve ever seen for an unreleased Apple product, not counting the iPhone 4, and folks are starting to wonder how this can be possible with a company that thrives on secrecy.

Well for one, these parts aren’t coming out of Cupertino, where Apple has secured buildings with cameras and card scanners. They are coming out of the one place the company doesn’t have very much control over, its supply chain.

Apple’s supply chain is made up of dozens of component manufacturers, with hundreds of thousands of employees. And these employees, who are known for being underpaid, are constantly being offered money and other rewards by case manufacturers and other third parties for any parts belonging to Apple’s new products.

And if you’re still skeptical, consider this: we’ve seen enough purported next-gen iPhone components to basically build a handset. So if they don’t belong to the next iPhone, what do they belong to? As industrial designer Don Lehman points out, creating such an elaborate device would require the same design and engineering effort that would go into making an actual smartphone.

But obviously, nothing is a certainty. We won’t know for sure what the next iPhone looks like, or what features it will have, until Apple’s media event next month. But at the moment, it does seem like we have a pretty good idea of both.