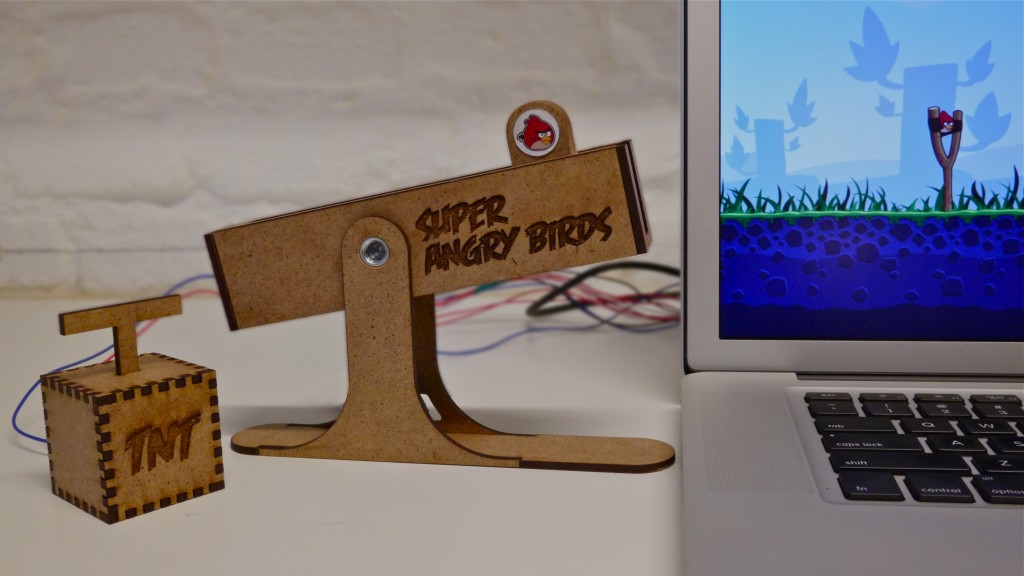 What do you get when you combine an Arduino-based microcontroller, a hacked motorized slider and one of the most popular video games of all time? The Super Angry Birds force feedback USB controller.

The DIY (do it yourself) controller simulates the game’s slingshot, giving you full control over both the angle and power at which the birds are launched. It’s hard to explain, you just have to see it in action…

Super Angry Birds is the product of a school project on haptics by Hideaki Matsui and Andrew Spitz. They explain:

“We hacked a motorized fader found in audio mixing consoles to create the force feedback. Basically, the way we achieved this is by drawing a force curve and storing the values in a table, then we send the current position of the slider through the table and extract the value the value to send to the motor that applies an opposing force.

We programmed in Max/MSP and Arduino. For controller the hardware, we used an Arduino-based microcontroller called Music & Motors developed by CIID.”

Of course, there’s a lot more to it than this. If you’re interested, you can read through all of the building steps in the team’s paper here.

The whole idea is pretty ingenious really. We just have two questions. One, would Hideaki and Andrew ever consider mass-producing these things? And two, when does the iOS-compatible version come out?

What do you think of the Super Angry Birds controller?