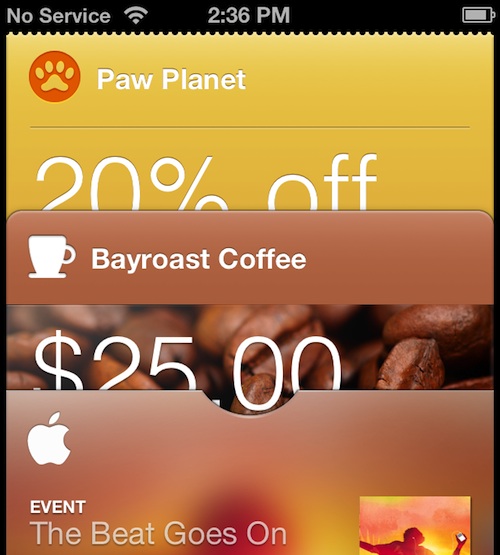 iOS 6 brings a new app called Passbook that Apple argues isn’t a direct payment product (yet). Instead, the program lets you collect and organize discount coupons, gift cards and some such. Patents, however, reveal that Apple is actively thinking about leveraging NFC technology to turn Passbook into a comprehensive mobile shopping solution, referred to as the iWallet.

You could create fake coupons to play around with in the Passbook app, but I’d bet my shirt that you’d still be scratching your head as to how exactly Passbook is supposed to work in real-life. A nice two-minute clip embedded below will help clear up the confusion by showing some interesting possibilities for Passbook through real-life examples…

AppleInsider points to a cool video by enterprise mobile strategy and app services company iOptimal, which used its proprietary app called Passbook App Prototyper that talks to Passbook, pretending to be a point of sale.

As a result, iOptimal was able to create a real-world example of what shopping using Apple’s Passbook solution could be like, down to the coupons, discount cards and so forth.

Note that Passbook operation is shown via an iOS simulator rather than on the device itself.

Doesn’t this video make you yearn for the fully-featured iWallet shopping solution, with credit cards and everything?