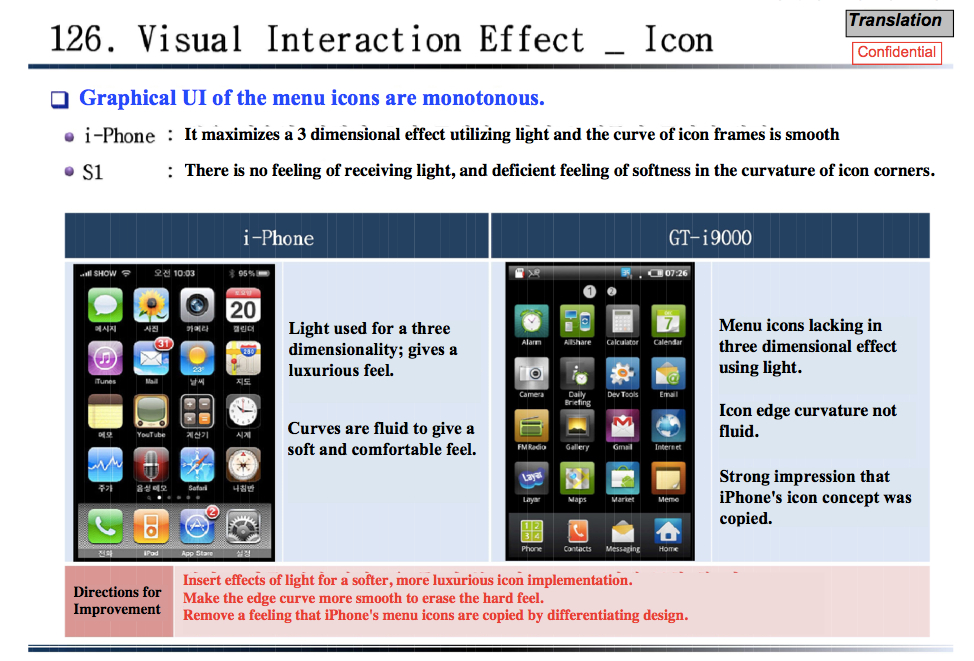 The high-profile court battle between Apple and Samsung has already yielded several interesting documents and secrets from both companies, and another morsel just surfaced.

This time it’s a 132-page internal report from Samsung, submitted into evidence by Apple in its ongoing effort to prove the company copied its smartphone and tablet designs…

“The 2010 report, translated from Korean, goes feature by feature, evaluating how Samsung’s phone stacks up against the iPhone.

Authored by Samsung’s product engineering team, the document evaluates everything from the home screen to the browser to the built in apps on both devices. In ease case, it comes up with a recommendation on what Samsung should do going forward and in most cases it answer is simple: Make it work more like the iPhone.

In short, the evaluation report makes the case that the Galaxy (identified here as the “S1″) would be better if behaved more like the iPhone and featured a similar user interface.”

If you’re interested in reading the whole report, AllThingsD has uploaded all 132 pages to Scribd, which you can read here.

Apple’s legal team has been on fire over the past few days, bringing in an industrial designer as an expert witness, and showing some good evidence to support its copycat claims. And this seems fairly significant as well.

Apple is asking for a total of $2.5 billion in compensation from Samsung, due to unjust and lost profits, and incurred royalty damages.

What do you think? Is Apple making a pretty good case here?