Following a flurry of speculation concerning an allegedly smaller, inexpensive iPad (insert your sandpaper joke here), analysts are running their spreadsheets to determine business logic behind a yet-unreleased $249 device.

One analyst estimates the mini iPad could sell a whopping 40 million units in its first twelve months on the market. For comparison, Apple sold a total of 84.1 million iPads as of March 31, 2012…

RBC Capital analyst Amit Daryanani wrote in a note yesterday (via Forbes) that based on the 10 million units estimate, the iPad mini would add an extra $1.15 in share profits. The analyst also writes that a “material ramp-up” strongly indicates that Apple is aggressively procuring parts for the device (or perhaps for the next iPhone?).

Apple is reportedly scheduled to hold a big media event on September 12, most likely to announce the next iPhone, though the iPad mini introduction could be on the agenda as well (some people say November).

The case for the mini iPad becomes much simpler if you take into account Apple’s current price umbrella for the iPod music player and the iPhone, which both cover a wide range of price points.

The iPad, however, starts out at $399 for the previous-generation 16GB WiFi iPad 2 model or $499 for the entry-level 16GB WiFi third-generation model. This leaves everything below $399 to competition, as seen in the below chart by Ryan Jones. 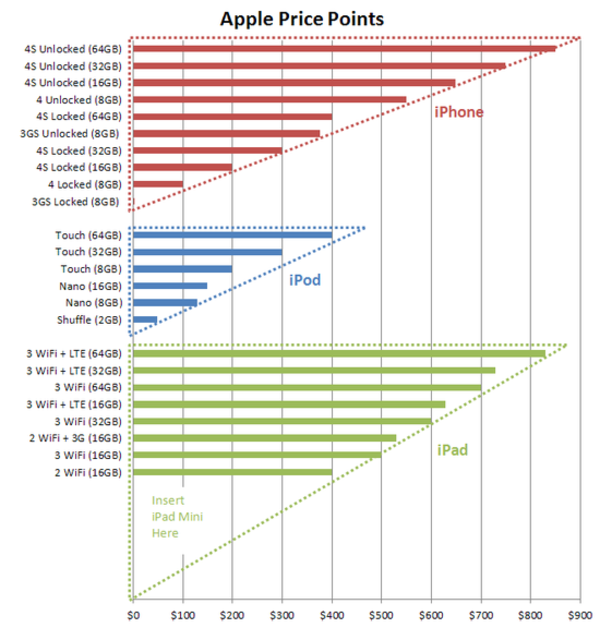 And with Amazon readying half a dozen new tablets (among them a ten-incher that will address the iPad on the high-end) and Google’s Nexus 7 picking up steam, evidently Apple would be foolish to leave the lower-end of the market (where the growth is) to rivals, especially to Google or Amazon which both rival iTunes with ecosystems of their own.