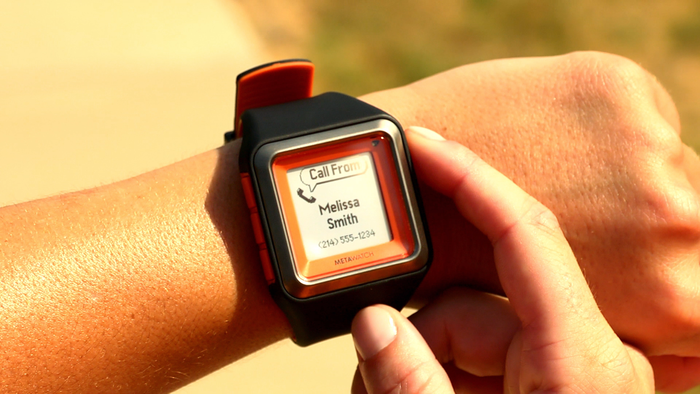 As the Pebble showed us, consumers are very interested in iPhone-connected smartwatches. The KickStarter project smashed all previous funding records, garnering over $10 million in pledges.

As you might have guessed, the success has drawn others into the smartwatch space. And today, we’re going to take a look at the latest entry, the Strata…

The Strata is made by the folks at MetaWatch — a company founded by engineers from Fossil’s old connected-watch division. The group already has a line of semi-successful Android smartwatches on the market, and now it’s decided to turn its attention to iOS.

The Strata’s list of features is a mile long. It supports push notifications from Facebook, Twitter and Mail. And thanks to iOS 6, it also supports text messages. It can pull information from apps like Weather, Stocks, Calendar, and Phone, and can remotely control the Music app. On top of that, like the Pebble, the Strata is built on an open source platform. So developers can create iPhone apps that compliment the watch.

As you can see in the video, the Strata has a few other unique features going for it as well. In addition to being a smartwatch, it’s also a sports watch. It’s made of a durable polyurethane, and is water resistant. It also has a 3 axis accelerometer — for fitness uses, vibrating alerts, and a built-in Lost Phone alarm, that lets you know when you’ve left you’re iPhone behind.

Unfortunately, the Strata isn’t available yet. MetaWatch is currently trying to raise $100,000 via Kickstarter in order to start mass producing them. At the time of this writing, they were only about half way there. But there’s still 22 days left. If you want to help fund the project, a pledge of $159 scores you your very own Strata, in one of four colors. It’s worth mentioning, here, that it also works with Android handsets as well. MetaWatch hopes to start shipping Stratas by the fall.

What do you think of the Strata smartwatch?