Continuing a string of accusations between Apple and Samsung ahead of the high-stake July 30 trial in the United States, the Galaxy maker asserted in court documents that the iPhone wouldn’t have been possible if it weren’t for Samsung’s patented technology.

Specifically, Samsung wrote Apple would have sold zero iPhones if it hadn’t been for its wireless technology patents that Apple relied heavily upon to enter the telecommunications space. The South Korean conglomerate also pulled an ace up its sleeve: dead-on prior art that allegedly invalidates Apple’s patents…

Ashby Jones, writing for the Wall Street Journal’s Law blog, reports on trial briefs from both Apple and Samsung.

Samsung has been researching and developing mobile telecommunications technology since at least as early as 1991 and invented much of the technology for today‘s smartphones.

Then the Galaxy maker dropped the hammer.

Indeed, Apple, which sold its first iPhone nearly twenty years after Samsung started developing mobile phone technology, could not have sold a single iPhone without the benefit of Samsung‘s patented technology.

Samsung went on to claim that Apple had borrowed concepts from other competitors, including Sony, to develop the iPhone and is now asserting complaints against Samsung using those same design concepts that Samsung felt should be in “public domain”.

Samsung did not infringe any of Apple‘s utility patents “that allow users to perform trivial touch screen functions”, the company wrote in court documents, adding “these technologies were developed and in widespread use well before Apple entered the mobile device market in 2007”.

In addition, the company “has located dead-on prior art that invalidates” Apple’s patents.

Samsung independently developed the allegedly copied  design features months before Apple had even announced the iPhone. It did not switch its design direction because of the iPhone. 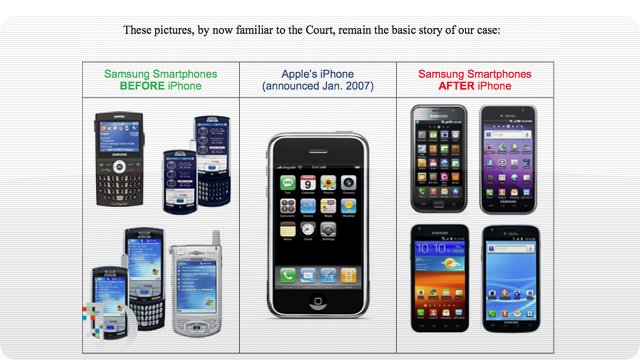 Apple was recently granted a bunch of smartphone patents related to iOS user interface and multitouch functions, including one dating back to 1996 and obtained from the original inventor.

Samsung’s reasoning kinda reminds me of Google’s take that some of the iPhone inventions Apple patented should belong to everyone.

Samsung and Apple are fighting for supremacy in the fast-growing smartphone market. Samsung, which sold 50 million smartphones in the June quarter versus 26 million iPhones, maintains its lead as both the world’s largest smartphone and cell phone vendor, ahead of Apple and Nokia, respectively.

Making matters complicated, Apple is one of Samsung’s biggest components buyer. Recent court-mediated talks between Apple CEO Tim Cook and Samsung execs led nowhere because the two firms couldn’t come to terms as to the value of each other’s intellectual property.

Apple was reportedly seeking as much as $2.5 billion from Samsung to license its technology, offering in return the per-device half a cent royalty fee to use Samsung’s patents in iOS gadgets.

Also this from Samsung:

Contrary to the image it has cultivated in the popular press, Apple has admitted in internal documents that its strength is not in developing new technologies first, but in successfully commercializing them.

Also contrary to Apple‘s accusations, Samsung does not need or want to copy; rather, it strives to best the competition by developing multiple, unique products.

Put simply, Samsung says Apple copied its technology first and not the other way around. Samsung could be overstating the importance of its patents though Apple clearly uses some of its patented technologies in iOS devices.

Should Apple lose the U.S. trial, Apple could face serious ramifications. Not only would its cases against other Android backers be weakened, the company could also find itself in serious trouble when the next iPhone lands this fall.

It’s a forgone conclusion that a sixth-generation will feature high-speed fourth-generation Long-Term Evolution (LTE) networking. The problem is, Samsung has invested heavily in 4G LTE and has plenty of patents covering 4G LTE, certainly more than Apple.

Apple, of course, will probably defend by saying that as a licensee of Broadcom wireless technology it couldn’t have directly infringed upon Samsung’s patents.

Is there an end in sight to this legal mess?