This is interesting. Google apparently specifically advised Samsung against ripping off the iPhone. Worse, Samsung reportedly was well aware that its Galaxy smartphones and tablets bore a striking resemblance to the iPhone and iPad. On top of that, the South Korean conglomerate apparently discussed this issue and dimissed concerns from both Google and famous designers who felt strongly that Samsung’s Galaxy S smartphone “looked like it copied the iPhone too much”.

This is per Samsung’s own internal documents that Apple intends use against Samsung in the high-profile Apple vs. Samsung lawsuit scheduled to begin July 30 in the United States. More juice details, including quotes, right after the break…

Some of the more notable examples Apple gleaned from Samsung’s documents, as reported by John Paczkowski of the Wall Street Journal’s AllThingsD blog:

• In February 2010, Google told Samsung that Samsung’s “P1” and “P3” tablets (Galaxy Tab and Galaxy Tab 10.1) were “too similar” to the iPad and demanded “distinguishable design vis-à-vis the iPad for the P3.”

• In 2011, Samsung’s own Product Design Group noted that it is “regrettable” that the Galaxy S “looks similar” to older iPhone models.

• As part of a formal, Samsung-sponsored evaluation, famous designers warned Samsung that the Galaxy S “looked like it copied the iPhone too much,” and that “innovation is needed.” The designers explained that the appearance of the Galaxy S “[c] losely resembles the iPhone shape so as to have no distinguishable elements,” and “[a]ll you have to do is cover up the Samsung logo and it’s difficult to find anything different from the iPhone.”

This comes just as we learn that Samsung is stepping up its legal response against Apple’s copycat accusations by aggressively claiming there would have been no iPhone in the first place had it not been for its wireless patents. 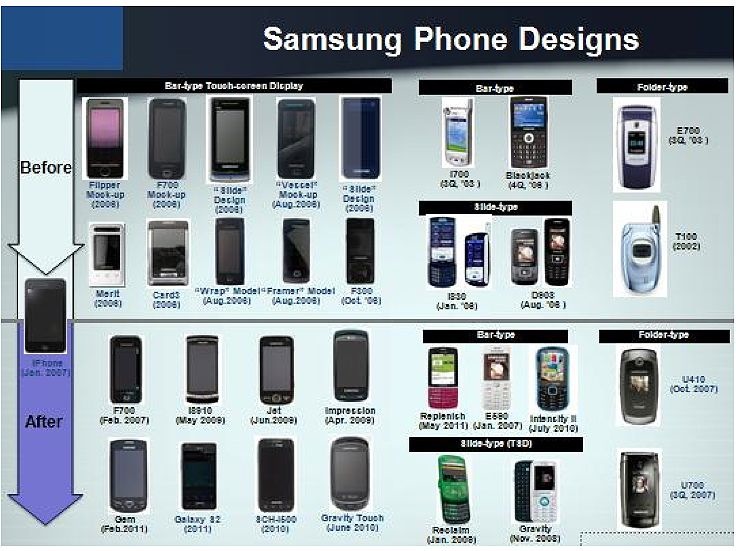 Samsung phones before and after the iPhone. Click for larger.

Following up on that report, Joel Rosenblatt wrote for Bloomberg today that Apple will tell jurors that Samsung had intentionally destroyed email messages that Apple later sought as evidence.

Also ahead the July 30 trial, Apple recently won an EU-wide sales ban on the 7.7-inch Galaxy Tab, though it lost appeal on the Galaxy Tab 10.1N. Apple is also reportedly seeking royalty fees in excess of up to $2.5 billion and offered Samsung to pay half a cent per device in exchange for its patents.

Do you feel that these developments strengthen Apple’s legal position ahead of the July 30 trial?