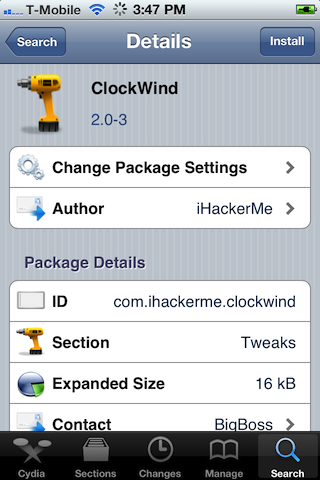 It’s sort of like putting a huge loud muffler on your car. Whatever makes you feel faster.

Indeed, ClockWind makes things seem faster, because it speeds up the UIKit animations on the iPhone. It seems fast, but it also feels disconcerting, if you ask me.

Here’s a hint: your iPhone isn’t any “faster” than it was prior to installing this tweak…

True, ClockWind does indeed lend the perception that things are going faster. It’s sort of like walking at a normal pace, but flailing your arms furiously as if you were sprinting. Things may feel a little faster, but ultimately you’d end up wearing yourself out without actually getting anywhere.

A slow iPhone is still a slow iPhone. ClockWind doesn’t bump your clock speed, it doesn’t add more memory, and it won’t speed up your Wi-Fi connection. It’s all about perception, and if that works for you, fine. I know a lot of people who love tweaks like this and its precursor — SpeedIntensifier — and they wouldn’t use their iDevice without them.

Personally, I just don’t get it.

ClockWind is a free jailbreak tweak available on Cydia’s BigBoss repo. How do you feel about it?