As part of the Music app overhaul, Apple with last week’s release of iOS 6 Beta 3 brought the Complete My Album feature directly to the Music app, meaning people can now complete their album purchases while on the go, directly in the jukebox app, without being yanked out and into the iTunes Store client. The integration also results in easier music discovery and faster, more seamless purchasing experience…

Mike Beasley, reporting for 9to5Mac, explains how it works:

The new button, which appears at the bottom of albums, is a Complete My Album toggle. However, rather than pull the user out of the Music app and into the iTunes Store, the list expands to show the entire album and allows for purchasing the songs directly in the new Music app.

Note that the feature doesn’t appear to work for iTunes Match tracks. Likewise, the Videos app has a new Complete My Season button which does the same for television shows as its Music counterpart for music albums.

Beasley also discovered a new “Listen” button which enables you to play any of the previously purchased songs in the iTunes Store app without having to switch to the Music app, as depicted in the below screenie. 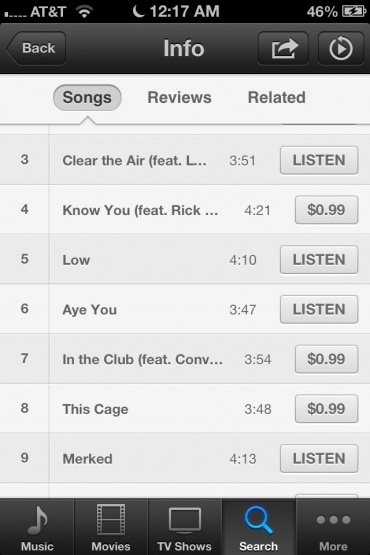 Apple’s FAQ describes Complete My Album as a useful feature of the iTunes Store which will “complete the album without having to pay the full album price, and instead of receiving the album in its entirety, you will receive only the songs you had not previously purchased”.

In most cases, the total price of the remaining tracks is fair and will incentivize you into buying the whole album. I know I have completed a bunch of albums in the past using Complete My Album.

Of course, this was back in the days when I was still paying for overpriced digital music files (imagine that) on iTunes. Nowadays, my music listening is all Spotify.

Still, those who prefer buying individual tracks and albums via iTunes will find this feature useful.

What do you think about Complete My Album in the Music app?