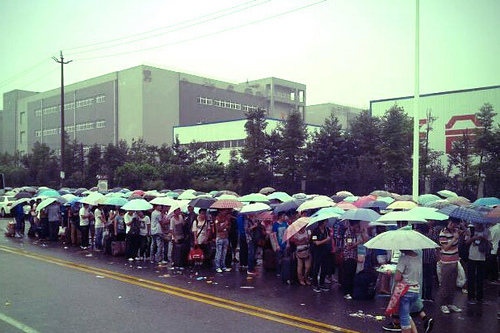 A new report is out this morning claiming that thousands of job seekers are currently lined up outside of Foxconn’s Chengdu, China plant. Apparently, the applicants are all vying for a number of summer job openings that were recently posted by the manufacturer.

It doesn’t take a lot of brain power to guess the nature of these positions. Apple, who just so happens to be Foxconn’s largest client, is widely expected to unveil two new major products this fall. One of which, the “iPhone 5,” is believed to already be in production…

“Apparently, the Foxconn plant in Chengdu is hiring now for summer jobs – and according to our sources, the plant is bring a large number of summer workers, which may still have openings. What’s more, the young jobseekers are required to submit a registration fee of 150 Chinese yuan (about $24) before he/she could apply. And there’s a requirement for applying for the job, you need to have good eyesight.

On the other side, the Foxconn plant in Zhengzhou is also hiring a large number of workers, just like what we have previously reported. According to our sources, one of the iPhone assembly lines inside the factory has recently assembled only five units of “the new iPhone” on a night shift. And that particular assembly line actually consists of more than a hundred workers. We were told that it was in the “trial production stage.”

The site also opines that, given the large scale of the hirings, it’s also possible that Foxconn is ramping up production for another Apple product: i.e. the “iPad mini.” Although the last we heard, that task had been handed off to the manufacturer’s Brazil location.

We obviously have no way of confirming the report, but it’s worth noting, as we have seen similar mass hirings by Foxconn in the past ahead of other product releases.

Apple will likely unveil its latest handset during a media event in late September or early October of this year. But so far there’s been no word on when (or if) it will introduce the smaller tablet.