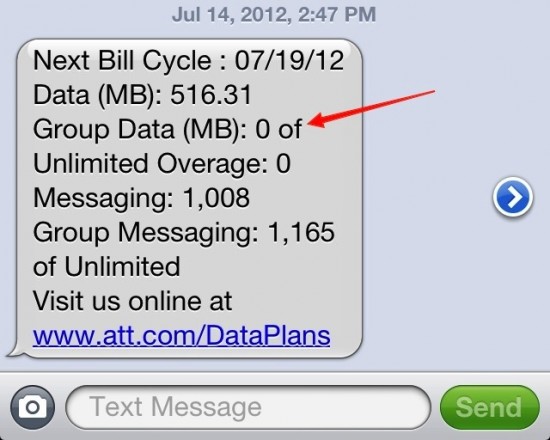 Once Verizon announced its new ‘shared data plan‘ strategy, we knew that it was only a matter of time before AT&T followed suit. As the two largest carriers in the US, the companies often take queues from one another.

AT&T’s CEO all-but-confirmed the carrier’s switch to shared data back in May of this year, but wouldn’t give any specifics on a launch date. It can’t be too far off though, as some users are already seeing the new plans…

TechnoBuffalo posted the above photo over the weekend, which it’s reporting came from a “curious tipster.” The image shows the standard usage breakdown, but the plan that the user appears to be on is not currently available on AT&T’s website.

Group data, accompanied by unlimited text messaging and unlimited voice minutes — this looks an awful lot like the Share Everything plans that Verizon launched last month, where prices are determined by the amount of data you need.

AT&T hasn’t made any official announcements regarding the new plans, so it’s likely that this particular user is in a test market. But considering that the carrier has a major smartphone launch coming up in October, we’re guessing it won’t be long before we see these plans rolled out nationwide.