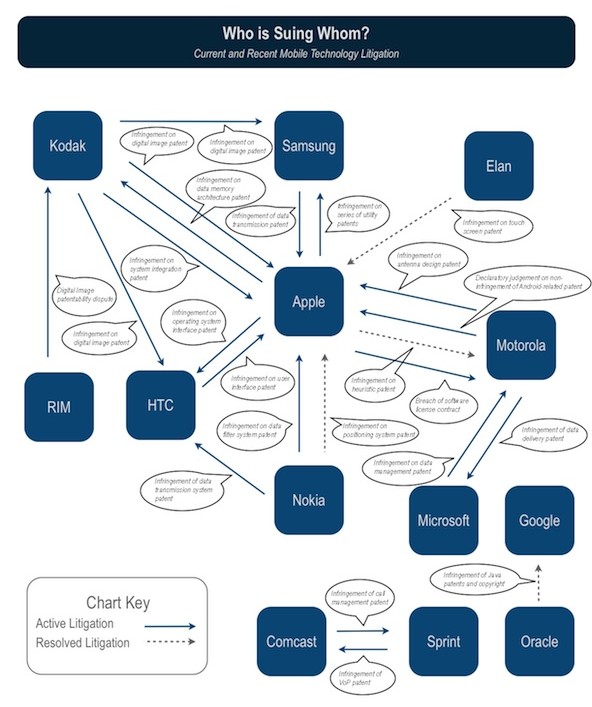 When Steve Jobs unveiled the original iPhone back in 2007, he commented “and boy have we patented it.” The CEO knew that Apple had something special on its hands, and that everyone else was going to try and replicate it.

He was right. Those patents he was referring to have since been involved in hundreds of lawsuits around the globe. In fact, a new report suggests that Apple is actually at the center of 60% of all major mobile litigation…

The news comes from Kanzatec IP Group, an intellectual property consulting firm based in Wichita, Kansas. The firm blames the high percentage on Apple’s meteoric rise to the top of the mobile industry.

“With its growing global market share and huge amount of cash on hand for possible settlements, Apple is becoming a bigger and more attractive target for patent holders. “I would speculate that Apple will continue to be at the center of the litigation map of large mobile IT companies for as along as it maintains its dominant place in the market,” said Feisal Mosleh, a senior vice president at Kanzatec.”

But Apple isn’t just a defendant in these patent suits — a majority of the time it starts them. There’s another famous Steve Jobs quote, which comes from Walter Isaacson’s book, that goes something like this:

“I will spend my last dying breath if I need to, and I will spend every penny of Apple’s $40 billion in the bank, to right this wrong. I’m going to destroy Android because it’s a stolen product. I’m willing to go thermonuclear war on this.”

Thermonuclear indeed. In the last two years, Apple has won a number of injunctions, on multiple continents, banning the sales of products from Samsung, HTC and Motorola. And by the looks of things, it’s not planning on stopping any time soon.

But despite court justification, Apple has taken a lot of heat over its legal tactics. The phrase “Apple would rather sue the competition than innovate” is becoming increasingly popular in the mobile community.

It is worth noting, however, that Apple doesn’t typically (if ever) sue for cash settlements — it has money. It generally justs requests sales bans, forcing manufacturers to remove their intellectual property from their devices. But that’s probably just as bad.

At any rate, here’s hoping that congress comes up with some kind of a solution to help end this patent madness. It seems like we’d all be a lot better off.