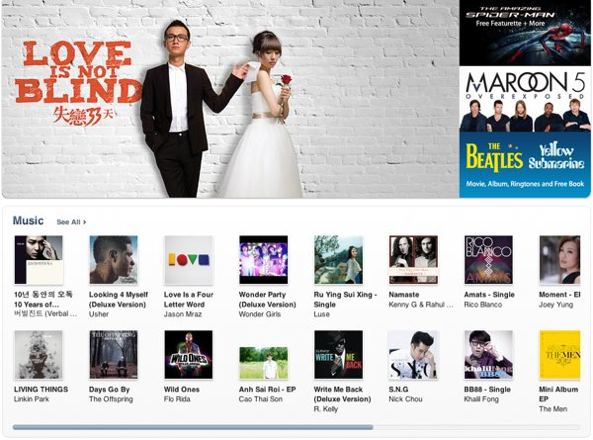 Apple has gotten lost in translation with last month’s launch of the iTunes Store and iTunes Match in twelve new Asian territories.

Specifically, user in Hong Kong are complaining over ugly translation woes, especially with Apple’s versions of song and album titles in the store’s music section…

On accessing the iTunes store for the first time, some Hong Kong users were irritated to find that the store was listing a number of song titles by the city’s popstars in Mandarin pinyin, a system that transcribes Chinese characters into phonetic Latin script, instead of displaying titles transliterated for the Cantonese language, which is spoken by the majority of the population.

It wouldn’t have been such a major headache if it weren’t for Hong Kong’s political background.

A former British colony, Hong Kong returned to mainland Chinese rule in 1997, but has stayed proudly loyal to its own native dialect and customs. Many locals resent the intrusion of Mandarin—which China’s government has promoted for decades as the official language across the border—and fear that Cantonese, spoken by 96% of the population, is gradually being shunted aside.

I must say, Apple’s translation of iTunes Store content in other micro-markets could use some work. While Italy, United Kingdom and Germany get to enjoy professionally translated content, countries like Slovenia and Croatia get to cope with translation that often doesn’t sound right.

I don’t know whether that’s the case because Apple lacks official presence in small markets, but something needs to be done about it. I don’t know what credentials these folks have, but it’s almost as if Cupertino is hiring some dude who claims to be a native Croatian speaker just because his family moved into the U.S. a decade ago.

I’d like to hear your opinion on the quality of translation in the iTunes Store specific to your local market.

Is it professional or does it need improving?