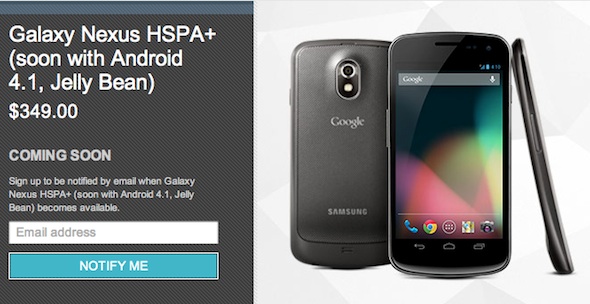 Last week, Apple was able to convince Koh that the Nexus was infringing on its patents — enough to warrant a preliminary ban. And it looks like that ban is already in effect…

The Verge noticed the missing device, and contacted Google to find out what’s up. While the company wouldn’t get into specifics, the timing of the pull is certainly suspicious:

“The timing of Google’s missing Nexus is interesting, to say the least: we’ve just confirmed that Apple has posted the nearly $96 million dollar bond required to begin the Galaxy Nexus in earnest.

Update 3: We just spoke to Google, which confirmed that the Galaxy Nexus is no longer on sale right now, but Google says the device will begin shipping next week.”

The Nexus is still available from Amazon, Target and other retailers. But just because it’s available for order, doesn’t mean it will ship. It’s likely that these companies have yet to receive instructions regarding the injunction.

Last night we learned that Google planned to help Samsung get around the ban by issuing a software patch to remove the infringing invention. And The Verge has more on that as well:

“We just spoke with a Google spokesperson, who informed us that the update, which will be rolling out to all Galaxy Nexus devices in the US regardless of carrier, will essentially dumb down the quick search bar on the Android homescreen, limiting its results to just those from the web. No local searches on the device will be performed at all, taking on-device apps, integrated Gmail, and other search results out of play.”

The update could very well free the Nexus from the ban, and help Samsung circumvent any future litigation regarding Apple’s ‘604 patent, which has to do with unified search functionality.

The patch is expected to start rolling out to devices OTA (over the air) as soon as tonight. It’ll certainly be interesting to see how this all plays out.