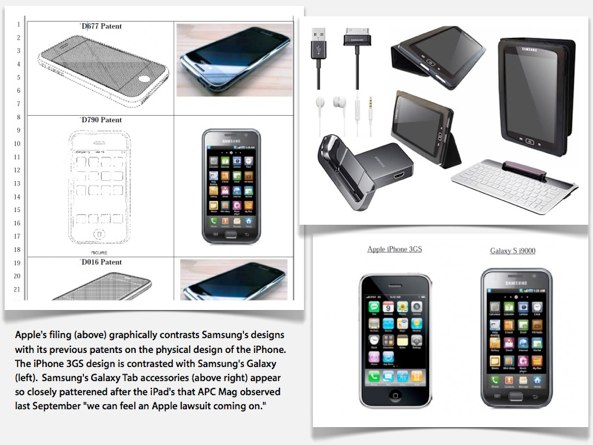 As if the fact that Samsung – Apple’s main supplier of processors, displays and flash memory chips – has been struggling to fend off Apple’s legal blows wasn’t enough, a new report out today has it that the maker of Galaxy smartphones and tablets is joining forces with Google as both firms seek to pressure Apple into a cross-licensing deal, with Cupertino paying both Samsung and Google to settle ongoing patenting woes.

If anything, Google openly supporting Samsung in the courtroom suggests nervousness on the part of both technology giants, especially as the latter has recently suffered a pair of legal setbacks concerning devices running Androids software, with potentially far-reaching consequences for the thriving Android ecosystem…

The Korea Times, a pro-Samsung publication, has the story:

A U.S. court recently ruled to block the sales of Samsung’s Galaxy Nexus smartphones, which were designed in collaboration with Google. Since the decision, the two firms have been working closely to create a united front against Apple’s legal offensive, said Samsung.

The publication noted that this is the first time Samsung confirmed it is getting help from Google in its legal battle with Apple. As Google is now a handset maker, it’ll certainly back Motorola too in its fight against Apple.

It’s interesting that major device makers, Samsung included, were last year forced into a per-device royalty deal with Microsoft, a setback for Google’s software. An unnamed Samsung insider was quoted in The Korea Times report:

It’s too early to comment on our game plan (with Google) in the legal battle; but we will do our best to get more royalties from Apple, which has benefited from our technology. The fight is becoming more dramatic and the possibility of a truce in the form of a cross-licensing deal, seems to be becoming likely.

I would be the first to welcome a possible cross-licensing deal so we can all put this legal mess behind us and focus on products, not litigation. Making this brouhaha more complicated, Google is also supporting HTC in its legal dealings with Apple. I think it just serves to highlight what a ruthless fight the mobile game has become.

Facebook is reportedly building a phone, Motorola exited feature phones, Mozilla today announced its own mobile operating system for feature phones, Nokia is mulling plan B now should its partnership with Microsoft takes a turn for the worse and RIM’s mobile web (and device) share is heading to zero.

Put simply, only Samsung and Apple are turning profit whereas everyone else are pretty much scrapping the bottom of the barrel for lose change. Apple’s luck in the courtroom began to change for the better with preliminary sales injunctions potentially putting a stop on the sale of Samsung’s Galaxy Tab tablet and Galaxy Nexus smartphone.

Neither device is a big seller, but the Galaxy S III is entirely different story. It racketed up nine million pre-orders and Samsung hopes to sell more than ten million units this month.

So, what if Apple succeeds in stopping the sale of Samsung’s flagship handset (it initially failed) hot off the heels of the aforementioned Galaxy Nexus injunction?

Enter Analyst Brian White of Topeka Capital Markets, who wrote in a note to clients today (via AppleInsider) that a legal victory halting its sale would leave Samsung with “big problems on its hands”.

A ban on Galaxy Nexus would cost Samsung $120 million over a two-month period and the Galaxy Tab ban is estimated at $80 million in lost sales. In other words, Samsung is facing a $200 million punishment in the consecutive rulings.

Makes you wonder what’s next: a suit over this?

Samsung’s plan B, if Android becomes a liability?

Of course, there’s another face to all this: what happens when Samsung’s legal sharks go after the next iPhone?