Research firm NetApplications yesterday issued a new mobile web usage share report which outlines mobile and tablet operating system share trends for the month of July 2012. iOS leads the pack in mobile web share and by a huge margin, too. The numbers also paint an alarming trend for RIM, which is now heading to a zero market share as the ailing BlackBerry maker struggles to turn its fortunes around…

According to the survey, based on data obtained from 40,00 sites participating in NetApplications’ network, the iOS platform – which includes the iPhone, iPod touch and iPad – had a dominant share of mobile web browsing in June, pegged at 65.27 percent.

Android came in second with a 19.73 percent share, more than three times less compared to iOS. However, Android grew faster, having boosted its mobile web share 38 percent year over year while iOS increased by 24.5 percent. Here’s a table overview of the trends.

Notice how RIM’s share has been steadily plummeting over the past months and is now heading towards zero.

RIM CEO Thorsten Gerhard Heins said last week unveiling his company’s dismal financial performance that the BlackBerry 10 software will be delayed until 2013 because RIM is “building a full, new, mobile computing platform that cannot be underestimated”, noting that “hardware plays a key role, but what will be really, really different and exciting about BlackBerry 10 will be the entire user experience”.

Here’s to the hoping we get to see BlackBerry 10 in action before the company sells off.

It’s obviously in the Other category.

NetApplications’ numbers are corroborated somewhat by StatCounter, another analytics firm based in Dublin, Ireland. They monitor more sites – three million to be exact – but use a different methodology so the results wary.

For good measure, let’s look at StatCounter’s report (see the chart below).

As you can see, StatCounter has iOS and Android fighting neck to neck for the #2 spot, with the latter having a slight edge over Apple. Symbian leads the pack, which still puzzles me. This is likely due to the fact that StatCounter just publish the numbers as they’re recorded instead of weighing data based on population statistics. 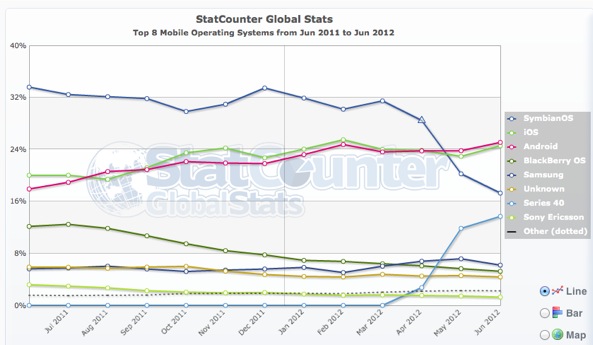 All other vendors are losing ground, except the Series 40 platform (another surprise). Series 40 powers Nokia’s mid-tier feature phones and some of the Vertu line of luxury phones. Though StatCounter’s data indicates a sales increase for Nokia, I’d challenge this assumption and conclude that perhaps Symbian 40-toting users may have been browsing the web more since March.

As Fred Wilson put it, mobile is where the growth is.

Surprised that iOS is increasing its lead over Android? What about Android’s mobile web share growing faster than Apple’s? Who to trust, NetApplications and its weighed stats or StatCounter and its raw numbers?

As Android is outselling iOS in terms of units, I’d say this isn’t surprising.